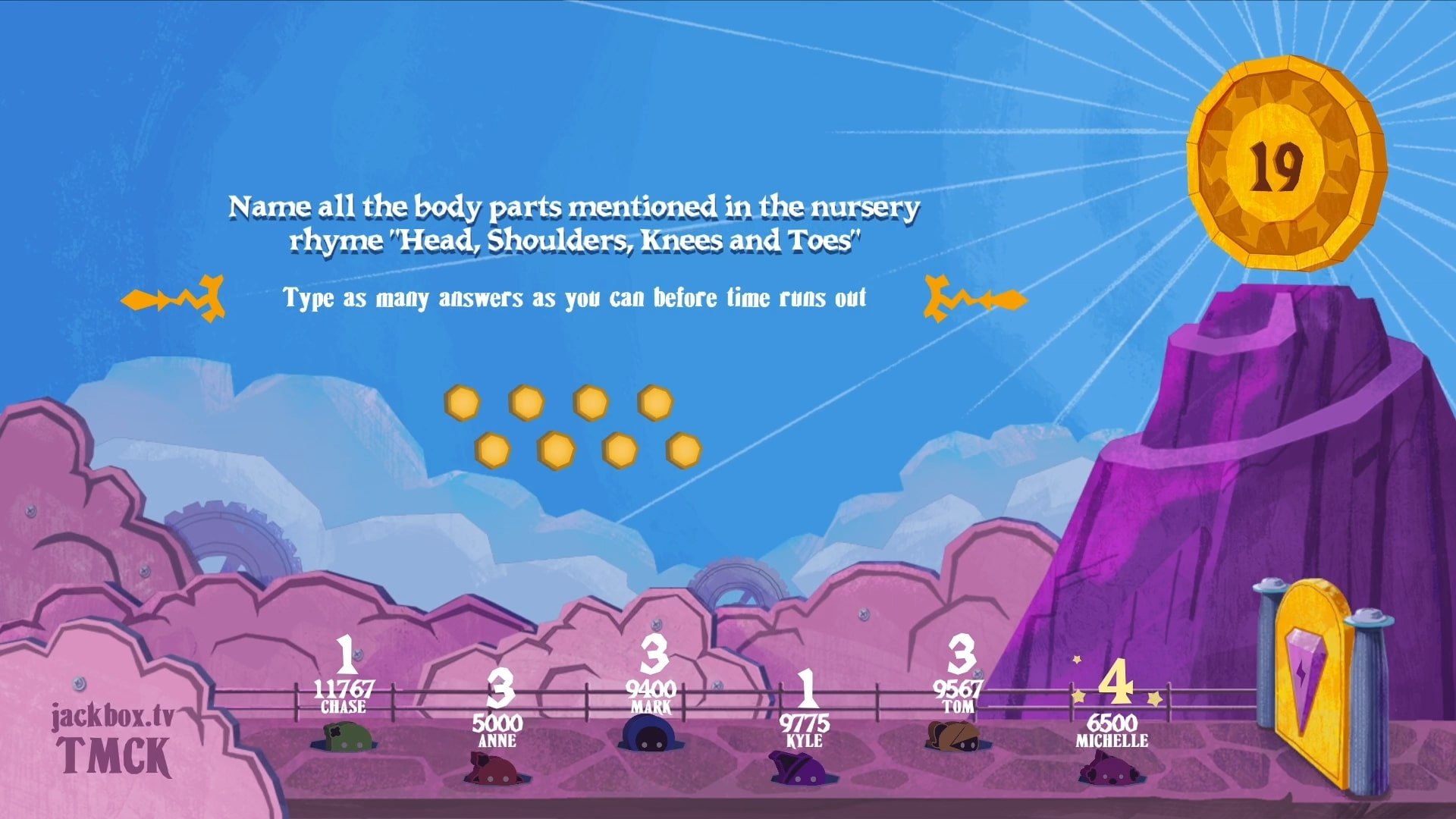 Six is such a good number of players for a game night. It’s enough people to really get the energy flowing, but not so many that you’re waiting a long time for your turn. We all know Jared reeeeaaaally takes his time when it’s his turn to do the charades….

Whether you’re attending a game night for three couples, two throuples or just six regular degular friends, we’ve got you covered. Here are six party game recommendations for your group of six:

This part-trivia part-chance game will have your party roaring with excitement in no time. A group of six is the perfect size for a bit of friendly competition–and yelling across the room when someone steals your precious points away. The Wheel of Enormous Proportions is an engaging option for your party of six, whether that party is taking place in person or over video.

If you’re playing with a group that isn’t yet familiar with Jackbox, Quiplash 3 is a great place to start. Quiplash 3, our latest iteration of the game, can be found in The Jackbox Party Pack 7. You and your group will be challenged to outwit each other with responses to hilarious prompts. Other players will vote on their favorite in three rounds. Who’s the quippiest friend in the group? That’s for you to find out.

In Tee K.O., players will be tasked with creating drawings and slogans that are then shuffled and sent to other players. Each player will then combine adrawing and slogan to create a t-shirt. T-shirts meet in head-to-head matchups in which everyone votes on their favorite. At the end of the game, one shirt will remain as the ultimate champion. You can even order the t-shirts after the game and wear them at your next six-person game night.

If anyone in your group of six is a real dad joke connoisseur, Joke Boat is the perfect fit for your game night. In Joke Boat, you’ll provide inspiration for other players to craft jokes that follow a clear format. For example, you might be given the prompt “My nickname is NOVELTY T-SHIRT because,” which you might complete  with “people laugh when they see me.” You can opt to perform these jokes out loud (which we highly recommend for maximum effect). Players will then vote on their favorite.

Care for a little murder mystery? Weapons Drawn is a great party game for six players. In Weapons Drawn, you’ll be challenged to hide an initial from your name in a calling card, which is used to *gasp* murder party guests. The best part? Everyone’s a detective AND everyone’s a murderer. Boldly accuse your friends of crimes while sneakily committing your own. This game is a blast for a group of six and will take around 30-40 minutes depending on how sneaky your group is.

Found in the same pack as Weapons Drawn and The Wheel of Enormous Proportions, this game will test how well you know your group of six. What are their most controversial opinions? In The Poll Mine, each player will receive a topic and choices to rank. For instance, you might be prompted to rank pizza toppings. Working try to guess the highest ranked answers of the group in order to escape the witch’s cave. This game is sure to spark some interesting conversations in your group of six.

Been there, played that? Here’s a full list of our games and the player counts they support.