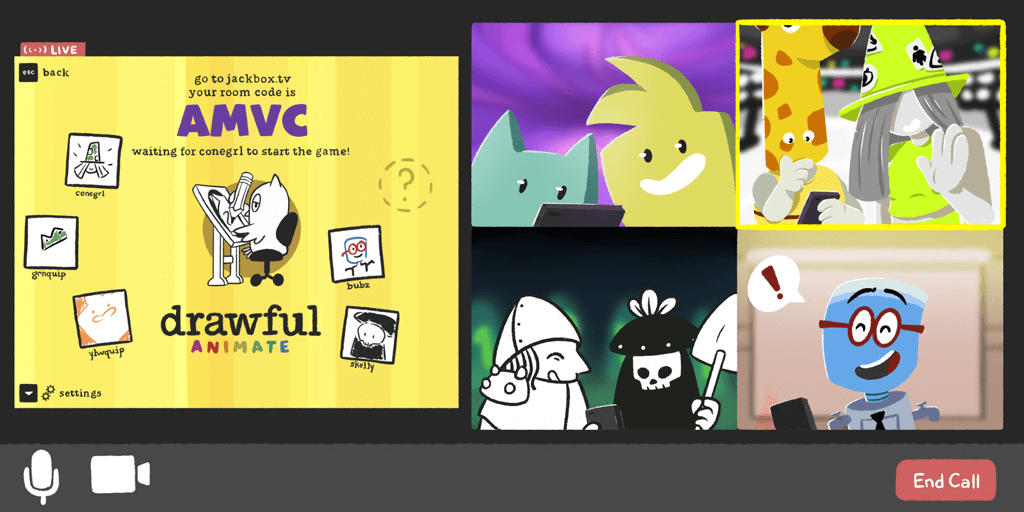 It’s just plain hard to get everyone in a room together these days. Sometimes friends live 10,000 miles away, like my friend Thora Shrimponthebarbie. Sometimes friends refuse to take a highly safe and effective vaccine that helps prevent mass hospitalizations due to the novel coronavirus like my friend Wyatt Theheckareyouthinking. So, we gotta party it up remotely! That’s OK!  And that’s where Jackbox Games comes in.

Listen, we here at Jackbox Games have got a heck ton of games, and all of them are fantastic, but some of them can be hard to play if you’re trying to do them remotely. My favorite game, Zeeple Dome, a real time action game from the Jackbox Party Pack 5, can suffer from annoying lag over Zoom. Another favorite, Fakin’ It (from the Jackbox Party Pack 3) is a hilarious party game where you have to see what people are doing, not always ideal with everyone’s differing camera qualities and connections.

We’ve already shown you how to host a Jackbox game remotely here, but the big question remaining is: what are the best Jackbox games to play remotely? Never fear, we wrote you a list!

The Quiplash series is the flagship of our fleet. Players answer prompts or questions while other players and audience members vote on which one they think is the funniest. Simple as that!  Quiplash is a great straight-forward hyper engaging way to party it up over Zoom/Google Hangouts. Who doesn’t love being affirmed as the wittiest person in the room?

And even if you can’t be witty it’s easy to win because a stupid answer might be the funnier choice!  This game is great for friends. Most of the engagement happens on the phone but you’ll probably want to have your sound and camera on because it feels oh so good to hear the laughs. Quiplash 2 and Quiplash 3 also offer players a customizable create-your-own-episode feature, so you can cater the prompts and questions to your specific hang-out. Need to roast the birthday boy? You can make all the prompts about them during your virtual party game night.

Fibbage is a trivia game where players make up fake answers to deep-cut trivia questions and try to trick other players into believing their answer is right. You don’t have to know a ton of trivia to succeed, making Fibbage one of our most accessible virtual trivia games. In fact, a sharp wit and knack for deception could win you the game.

And good news – if Fibbage becomes a hit amongst your friends on virtual game nights, we have a couple sequels full of new questions. Fibbage is a fun virtual party game for a wide range of groups — from your virtual bachelorette party with your nastiest friends to a remote new employee icebreaker.

Fibbage 3 also comes with a customizable version of the game, Fibbage: Enough About You where players truthfully answer questions about themselves while other players make up falsehoods to trick each other. It’s an engaging, unique way to get to know each other, even when you’re separated by a screen.

We love drawing at Jackbox. Drawful and it’s sequels are the best drawing games to play over Zoom. How does it work? Players draw a picture from a strange prompt. Then, one by one, those drawings will be shown to the rest of the group. Each person tries to create a title for the image that will fool others into believing it was the original prompt.

Drawing skills are not necessary for Drawful (a portmanteau of Draw and awful) and in fact, the less accurate your drawing often makes for a better game. It’s a silly, fast-paced game without a lot of downtime. Players remain engaged the whole time, either by drawing or writing titles on their devices.

These games are great for a wide-range of remote gatherings, and just like Quiplash 2 and 3, Drawful 2 offers a create-your-own-episode feature where you can customize the prompts.  Also now, in the new Drawful: Animate from the Jackbox Party Pack 8, there is a friend mode feature that invites players to draw silly prompts about other players. So if you want to draw your Uncle with a watermelon head, we got you covered.

If your group of friends is super opinionated and likes debate, we’ve got a game for you. In Split the Room, players are given a scenario (essentially would-you-rather prompts) and must fill in the blank with an answer that they think would be the most divisive for the group. The most controversial answers win!

The prompts for Split the Room are silly and never cut too deep. Like Quiplash, this is a great game for friends who are comfortable voicing their thoughts on bizarre scenarios. It’s best enjoyed with your sound and cameras on so you can gauge reactions and voice your thoughts.

It’s a solid way to blow off some steam if your family loves arguing over nonsense at Thanksgiving. And no, I won’t go into detail about why I know this.

We’ve got word games up the Wazoo here at Jackbox but the latest one from Party Pack 8, Job Job, is one of our best funny party games to play over Zoom.

In Job Job, players answer generic job interview questions and scenarios. Then, using another player’s answers, they must build their new responses to weird prompts poetry-in-motion style.  Funniest answers are rewarded points and because of the nature of building answers by selecting random words, the answers are always funny or bizarre.

Most of the engagement happens on devices, so there isn’t much to say or do over your cameras. However, you might want to be quick to un-mute yourself to scream at people when their deranged answers come up.

Ah, our namesake: the classic trivia game with some new twists.

In You Don’t Know Jack: Full Stream, Cookie Masterson hosts and data mines for the (fake) media streaming service Binjpipe, asking unique questions and giving players money. This is a fantastic game for friends and strangers alike who love trivia.

You’ll want to make sure your remote party game participants have a strong internet connection. The timed aspect of the game requires players to be up-to-speed for maximum enjoyment.

Remember the days when you would sit in class with an open notebook between your friends and you’d doodle on the same drawing making it more silly and absurd?  We made a game out of that!

Civic Doodle is a stellar remote game for a group that just wants to have a little virtual fun. Because while there are points and winners, it’s super collaborative and low-stakes.

Civic Doodle is suitable to play with old friends or new friends. Players remain engaged the whole time and the final art creations can get laughably bizarre.

In this one, you’ll be split into teams Quixort is a game that simply asks you to arrange the multiple answers to a singular trivia question into their proper order. And even better, the answers are contained in blocks that fall from the top and are guided by adorable, hard-working robots.

So, you not only get the satisfaction of putting things in order but also the anxiety caused by an unrelenting industrial process that JUST KEEPS SPITTING OUT BLOCKS! Fun, right?

While this list includes some of our favorites to play remotely, Jackbox Games has a little something for everyone and there are a pantsload of other Party Pack games that might be perfect for your specific Zoom party. Most Jackbox Games can host up to eight players and an audience of 10,000, which means any remote party with any number of Zoom participants (except 10,001, I guess) can participate.