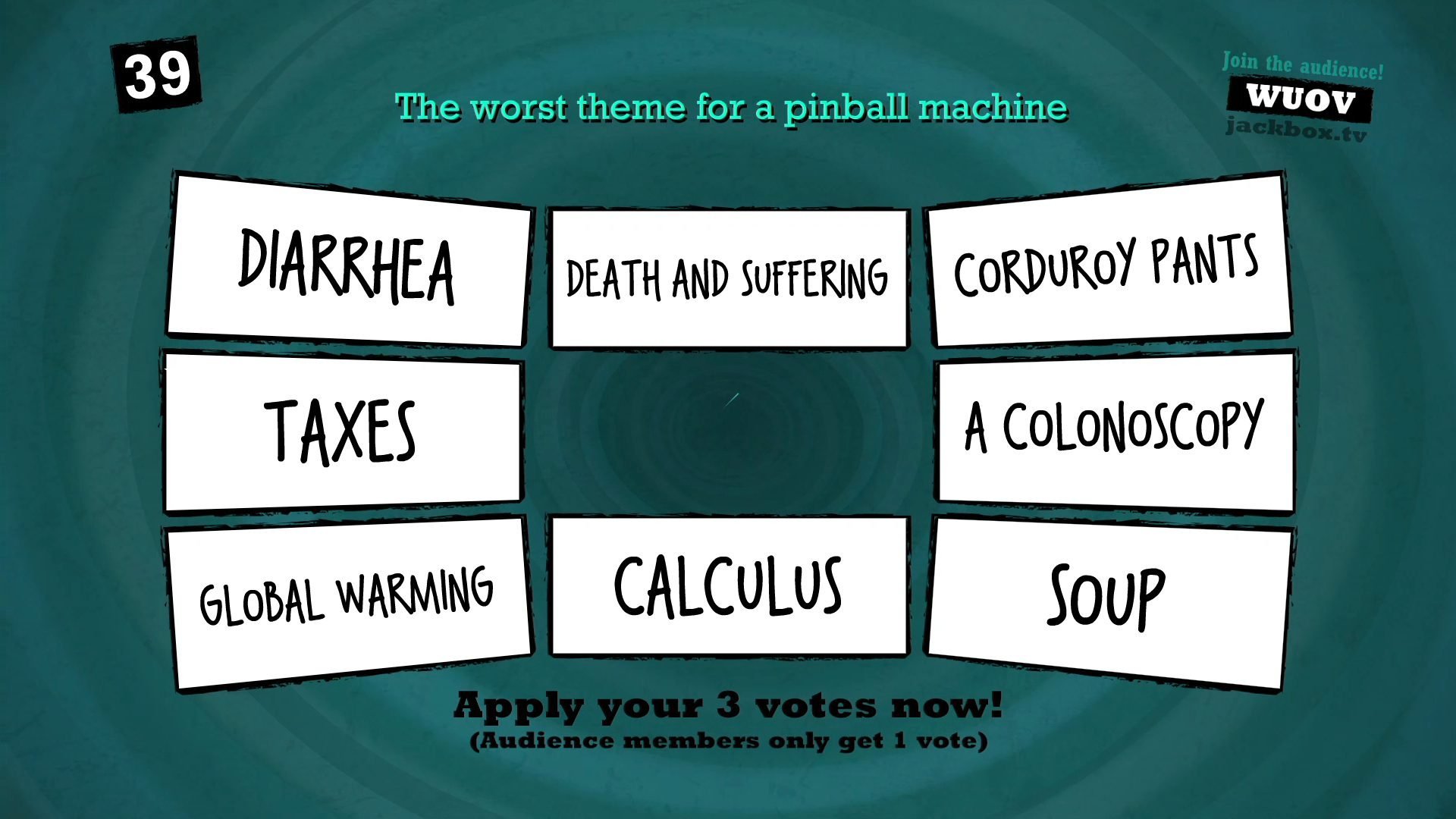 Need an outlet for all those hilarious jokes cooped up in that brain of yours? Want to prove you’re funnier than Joe in accounting at the office happy hour party? Do you need to demonstrate once and for all that you’re wittier than your siblings?

Well then, it’s time to bust out some Jackbox Games. Here are four funny games sure to win you the class clown superlative title.

Quiplash is Jackbox Games’ head-to-head battle of the wits game. In this funny group party game, you’ll receive a prompt on your phone (for all of our games, you’ll use a phone or tablet as your controller). You’ll be asked to answer prompts such as: “The dumbest use of science would be to clone a ____” and “The Eiffel Tower would be a lot cooler if it had___.” You and your group will each type a hilarious response on your device.

Your answers will then appear on screen, and the group will vote between two to decide which quip is the best. Obviously, your answers will be the best and funniest. Everyone’s gonna do a spit-take.

Quiplash is such a crowd favorite, we’ve released four editions! Each edition contains different hilarious prompts for you to prove yourself as the quippiest friend. Quiplash is great for groups of 3-10 players, and supports audience voting for larger groups. You can play in person or remotely. The latest version, Quiplash 3, is available in The Jackbox Party Pack 7, which includes our next funny party game recommendation…

Maybe you’re less of a comedic writer, and more of an improviser. Talking Points is the game for you. In Talking Points, you’ll be asked to deliver a speech on the fly with the assistance of another player controlling your slides. Pure hilarious chaos.

At the beginning of your round, you’ll choose a speech topic from a list of options decided by others in your group. As the slides progress, you might be forced to justify an extremely silly stock photo or a seemingly irrelevant graphic. Talking Points will test your on-the-fly thinking, and often devolves into uncontrollable laughter amidst groups of funny friends.

Need a funny party game for your office gathering? Give Job Job from The Jackbox Party Pack 8 a try.

Set in a standard office and framed as a job interview, Job Job is no ordinary hiring process. Initially, you’ll be prompted to answer some icebreaker questions. Then, you’ll be given interview questions. The catch? You can only answer using the scrambled responses from other players’ icebreakers.

This funny party game will challenge your resourcefulness. Craft funny responses with minimal responses, and then vote on the best answers. The winner gets the job!

Drawful and its sequels Drawful 2 and Drawful: Animate don’t require you to bring your comedy A-game, but are sure to deliver a ton of laughs. (But also you get bonus points for writing funny titles, so you better bring it).

In Drawful, you’ll be asked to draw ridiculous prompts. Your drawing will appear on screen, and other players will be prompted to write a title for your drawing. Those titles will then be displayed next to your drawing for all players to see. Everyone will guess which title originally inspired your masterpiece.

The latest iteration of the game, Drawful: Animate, takes things up a notch by asking players to draw two frames of animation.

At the end of the day, many of our games can inspire a night full of laughter and delight. Check out all of our titles here.