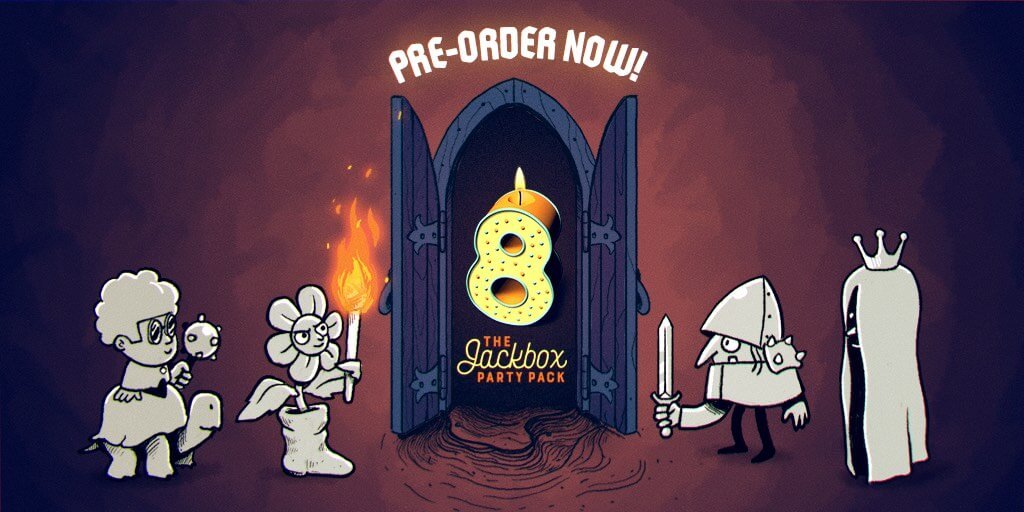 It’s that time of year again. That’s right — it’s cuffing season. Time to make a commitment and lock it down with the best party games of 2021. And we have you covered at Jackbox Games with Steam code pre-orders now available for The Jackbox Party Pack 8.

What’s the perk of locking it down early? Well, for starters, you’ll get 10% off when you pre-order The Jackbox Party Pack 8 before its official release.

No need to mark your calendar. When you pre-order Steam codes, you’ll get reminders to make sure you know when to expect your sweet, sweet pack o’ party games.

Also, The Jackbox Party Pack 8 has five games perfect for your Halloween party. Job Job will test your wits and adaptability as you use others’ scrambled words to answer interview questions. The Wheel of Enormous Proportions will test your knowledge (and your patience) with a chaotic mix of trivia and chance. The Poll Mine, our new spooky head-to-head team survey game, is perfect for discovering your friends’ most controversial opinions. Drawful: Animate will test your drawing skills with two-frame animation and tons of silly new prompts. And of course no Halloween party is complete without a little playful murder, which you’ll commit and convict in Weapons Drawn.

Show off your new party games to friends! Make them wonder why they spend all their time swiping on apps when they could just commit to playing fun and engaging party games. Of course, there’s enough copies of The Jackbox Party Pack 8 for everyone to enjoy if you’re feeling generous this cuffing season. Plan ahead for the holidays and snag some Steam codes for gifts at a 10% discount.

NOTE: When you make a pre-order purchase, you will be emailed when the game officially launches in October with a reminder to redeem your code and start playing. Pre-orders through our site are only available as Steam codes. The Jackbox Party Pack 8 will be available on other platforms, including PS4, Nintendo Switch, and Xbox One, on October 14th.If you want to keep up with future announcements about The Jackbox Party Pack 8, don’t forget to follow us on Instagram, Twitter, TikTok and Facebook and subscribe to our email list in the footer of this page.