The Best Jackbox Games To Play With Four People 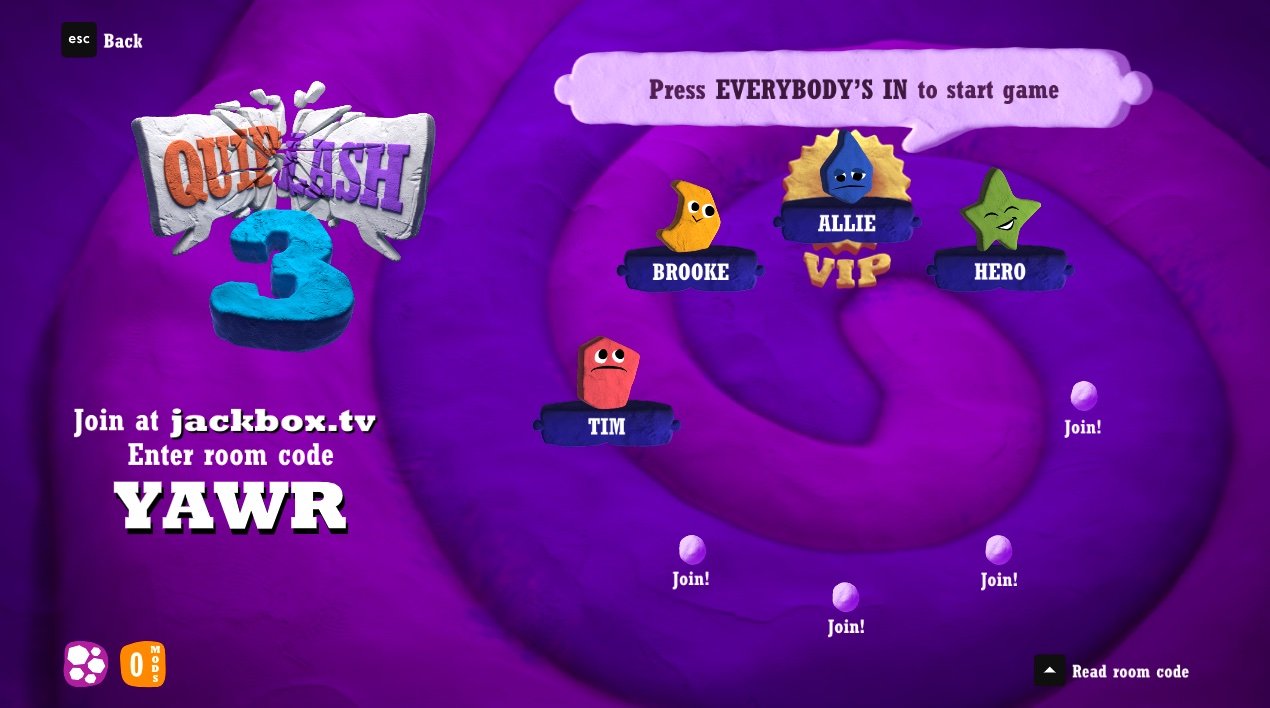 It’s a tale as old as time: you’re the ghost of an old clockmaker who died on the Titanic, and the three people who live in the house you haunt love to play Jackbox games! But it can be hard to determine which games are ideal for the four of you to play. O, it can be as hard as managing to get a good night’s sleep on your GhosTempurpedic bed! OOooooOoOoO!

Struggle no further. Read on to learn all about the best Jackbox games to play with four people, and sing your angry ghost song no more!

In Civic Doodle, found in The Jackbox Party Pack 4, you and your human family get to take turns adding to each other’s drawings and voting on your favorites. It’s pure silly fun and the perfect way to spend an evening laughing at everyone’s subpar artistic skills.

Besides, what else would you be doing on a cold evening alone? Gazing out from the widow’s walk, letting the wind steal the name “Clara…” from your breath? Dancing a mournful jig? Yeah, that’s what we thought, buddy!

Tough hypothetical questions meet their match in Split the Room, found in The Jackbox Party Pack 5, where humans and ghosts alike have to craft and answer difficult “Would You Rather” scenarios.

Oh, how you wish this game had been around before your untimely demise! Perhaps it would have allowed you to give up that fateful third-class ticket you won in a poker game mere minutes before the Titanic sailed… perhaps!

Everyone loves to tag themselves. Are you the smart one in your group? The funny one? The one fore’er doomed to haunt the misty moors in search of a peace that eludes your grasp? The one who looooves doing CrossFit?

Figure out which one you are, once and for all, with Role Models, found in The Jackbox Party Pack 6! It’s a game of categorization and classification perfect for a group of four. It’s also far more exciting than spending yet another night emitting your ghostly cries whenever you hear someone mention iceberg lettuce.

Has anyone ever told you that you’re funny? Like, really, really, funny? Like, when you stop moaning and rattling your GhostChains(™), you’re actually pretty darn funny? Prove it to the world with Quiplash, found in The Jackbox Party Pack 7, the game where you answer comedic prompts and everyone votes on the funniest responses.

How fun is Quiplash with four people? It’s more fun than repairing a box full of broken escape wheels and fly tension springs! Because you’re the ghost of an old clockmaker who died on the Titanic, remember? That’s the choice we made for this article, and we’re sticking to it.

We know this is a controversial choice because ghosts can’t wear the t-shirts you create in this head-to-head drawing/fighting game. We know you gnash your ghost teeth and attempt to rend your garments out of the sorrow you feel because of this. We get your emails, ghosts!

Well, sorry. It’s a super fun game for the living humans in your group of four, so maybe try to put your ghost feelings aside for an evening and play some Tee K.O. in The Jackbox Party Pack 3?

For more information on which games are perfect for your group size, check out our list here. And while you’re at it, stop emailing us to complain about how Billy Zane was snubbed for an Oscar for his work in Titanic. We hear you and we AGREE WITH YOU.