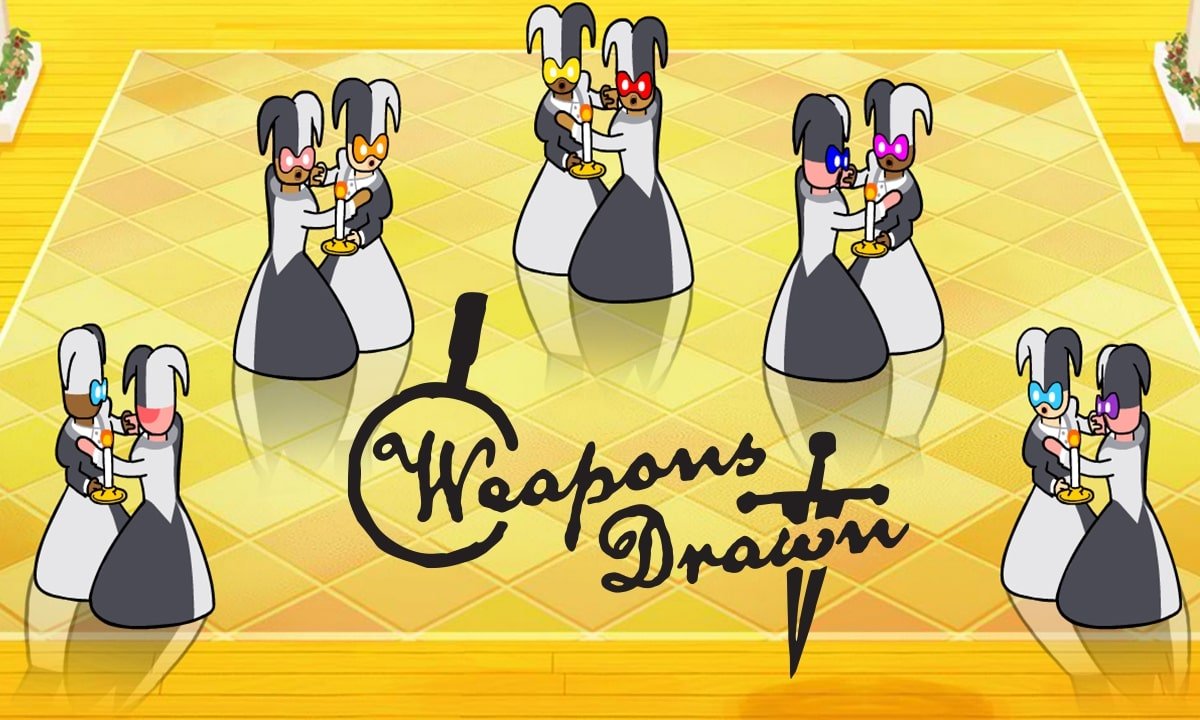 If you’re trying to figure out how to play Weapons Drawn, the new social deduction and drawing game from The Jackbox Party Pack 8, you’ve come to the right place. Here you’ll find an overview of gameplay, as well as some pro-tips and strategies for playing Weapons Drawn.

In Weapons Drawn, everyone is both a detective and a murderer. This means everyone gets to do “the fun part” (whichever part that is for you), and no one has to feel the pressure of being the only one with a secret role. It also means there’s some rules and strategy to keep straight, so consider this your definitive guide to successful killing and sleuthing in Weapons Drawn.

The first thing you’ll do is draw two murder weapons based on the prompts on your device. Each weapon must contain a letter from your own name, which will appear on your drawing canvas. This is your secret “calling card,” and you’ll want to hide it as sneakily as possible. Move and resize your letter using the “MOVE” tab, then draw around it to create the weapon on the “DRAW” tab. You can switch between moving and drawing as much as you want, but remember to get both weapons drawn before time runs out.

Everyone brings a pair of secret accomplices to the party as their guests. Give each guest a name that stands out, but doesn’t give any clues to your identity. Every time the lights go out, you’ll try to murder other guests by guessing which player brought them. If you’re successful, your weapon is left behind as evidence.

As the game begins, everyone has one of their drawings revealed. Take a look at each player’s art style and see if you can spot their hidden letter. Everyone keeps the same letter for the whole game, so if you spot an “R” in one of Grandma’s drawings, and later see an “R” in the murder weapon, there’s a good chance she’s the culprit.

After each round of murdering, you’ll get to vote on which of two cases you want to investigate. If you’re guilty of one of the murders, it’s a good idea to sway the group into voting for the other one. Try having a very loud, confident theory about it, even if you’re just making it up! The best  way to distract from your own crime is to solve another one.

Once a murder is chosen, everyone votes on who they think did it. The one who brought the murdered guest gets a magnifying glass they can move around the screen looking for clues. Talk to your fellow players! If you see a hidden letter or other telltale sign, share it with the room. If someone accuses you, stubbornly defend your honor, even if you’re guilty (this works best if you can find someone else to blame.) It’s always more fun when everyone’s yelling at each other. Whoever has the most votes when time runs out is convicted, and the game will reveal if they were guilty or innocent.

Any murder left unsolved, including those you chose not to investigate, will come back during the Cold Case round, where you’ll have just a few seconds to make one final guess on each crime.

During all these shenanigans, you’ll be earning points in three different categories:

The first two categories are the most important, but they all get added together to determine who wins the game.

Watch the Weapons Drawn tutorial below.

Some key things to remember if you want to take your Weapons game to the next level: