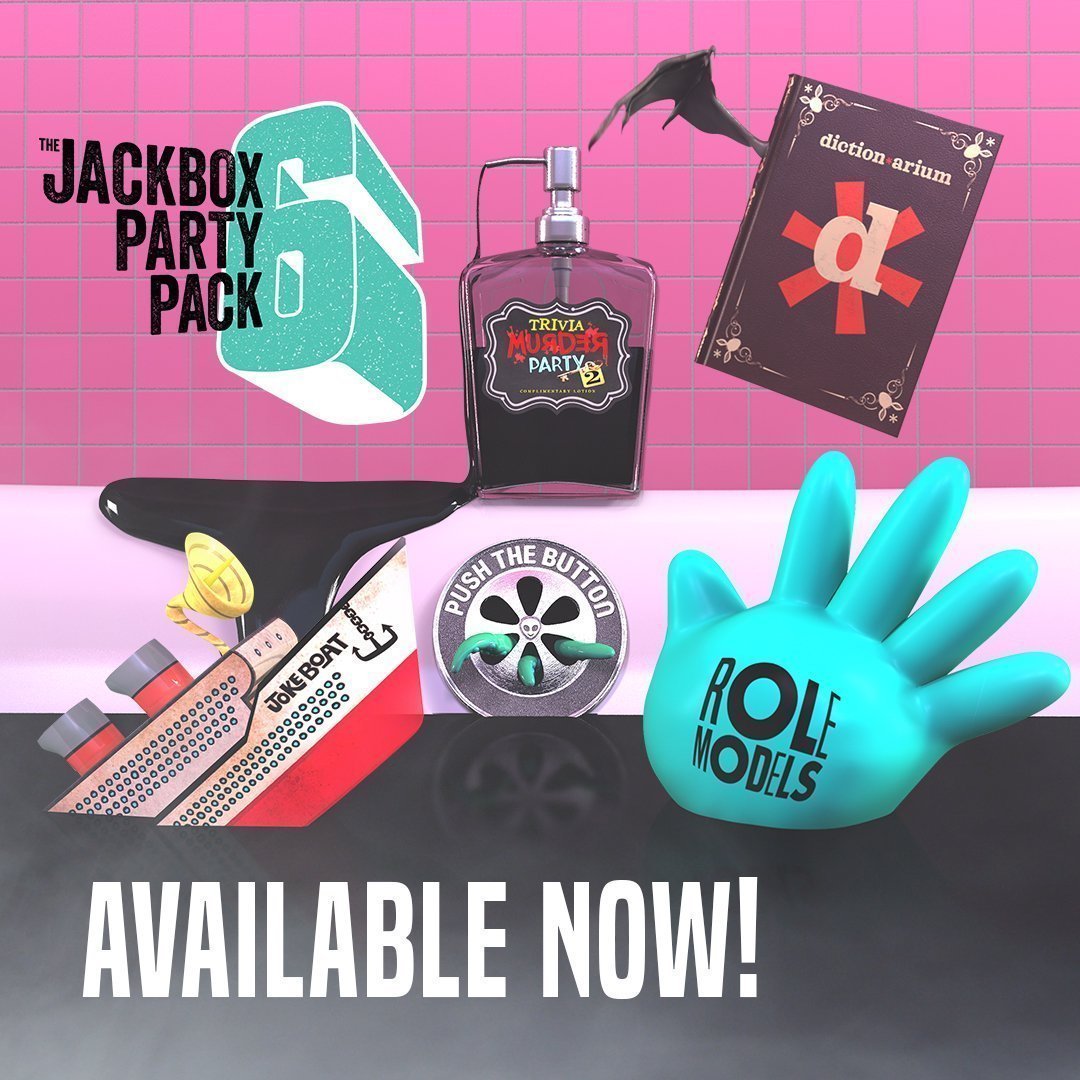 Grab your friends for the best party game collection ever, out now on consoles, PC and major digital platforms!

The Jackbox Party Pack 6 features five of the most sidesplitting and uproarious party games that have ever existed, including:

●  Trivia Murder Party 2, the deviously funny trivia game where getting questions wrong leads to fighting for your life in a variety of absurd and challenging mini-games (1-8 players).

●  Dictionarium, the wacky word game in which you compete to create definitions for totally made-up, never-before-seen words (3-8 players).

●  Push The Button, the space-age secret identity game in which you try to hunt down alien interlopers, while taking part in bizarre writing and drawing tasks (4-10 players).

●  Joke Boat, the seafaring stand-up game where you and your boatmates compete as aspiring comedians in a talent show on a fourth-rate cruise ship (3-8 players).

●  Role Models, the offbeat personality game in which you and your friends become guinea pigs for a mad scientist and label each other to find out who you really are (3-6 players). It’s also Jackbox Games’ first title to support player selfies as avatars!

Games in The Jackbox Party Pack series support phones, tablets, and computers as controllers. Just go to Jackbox.tv on your device and enter the room code to play. Up to 10,000 additional audience members can join specific games to affect their final outcome. Other options like passworded games, manual censoring, subtitles, and family-friendly modes make it easy for families and streamers to host the perfect party this holiday season.

The Jackbox Party Pack 6 is rated T (Teen) by the ESRB. For more information, check out JackboxGames.com/Party-Pack-Six.

Jackbox Games is a developer and publisher of party games on major gaming platforms and home entertainment devices. The studio is best known for comedic party games like YOU DON’T KNOW JACK, Fibbage, Quiplash, Drawful and Trivia Murder Party. Jackbox Games “makes the world’s best party games,” according to Business Insider. YOU DON’T KNOW JACK has been called “the greatest quiz-show game ever made” by The Onion’s A.V. Club. All current-generation Jackbox Games titles feature the innovative use of mobile devices as controllers, allowing anyone with an internet-connected phone, tablet or laptop to join a game without the need for extra game controllers. Players connect to games on their devices by visiting Jackbox.tv and entering the custom game code displayed via the system hosting the game. This unique concept also allows for games that involve secret player input. Jackbox Party Packs have been called “the definitive party game of a generation” by GQ Magazine. The company is located in Chicago, Illinois.For more information, visit www.jackboxgames.com, and follow the studio on Facebook, Instagram and Twitter.