The Fans Have Spoken: A Jackbox Valentine’s Day Fanfic Story 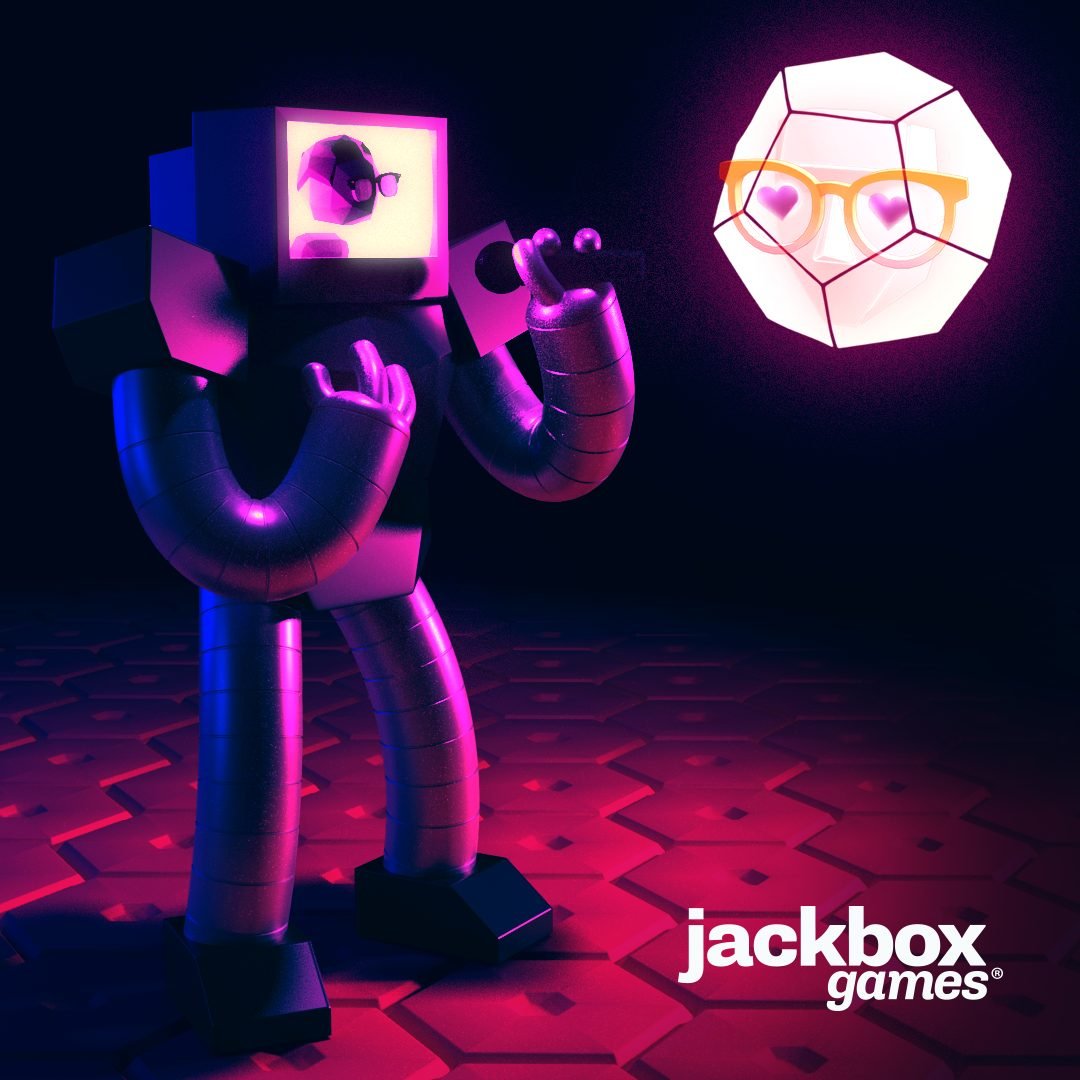 D.O.D.E. just wanted to find someone she could trust.

The last time D.O.D.E. had opened her programming to a crew member, they revealed themselves to be a terrible alien threat who had to die. Just once, she wished for a relationship that didn’t end with her partner and “heart” being blasted into the cold vacuum of space.

So, tonight, instead of a Digital Officer During Emergencies, D.O.D.E. wanted to be a Digital Officer Discovering Excitement. She floated into the Monster Seeking Monster singles mixer, a meetup event for those hosts and characters who don’t have the charm of a Cookie Masterson or the Adonis-like body of Schmitty.

She skipped over the dummies, deejays and Dictionarium host of undetermined origin and headed straight for the bar. That’s when she saw him: Gene-Bot.

The first thing she noticed about this robotic Romeo was that he was about ten-stories tall but carried himself with the humility of a small duplex. He had a kind screen that portrayed a kind face. The color of his mechanical body was several shades of gray. For a minute, D.O.D.E. wondered if they could get up to fifty.

D.O.D.E. glitched with embarrassment at the thought, but her system had been infected with the most dangerous alien virus of all: desire.

She loaded up her courage and sashayed over to Gene-Bot in a way she hoped would show off her twelve-sided figure. Gene-Bot turned to face her.

“I like your glasses,” they said in perfect robotic unison.

Gene-Bot had the programming of a character who had done many things with their life. He had been a comedian on a cruise ship, an amateur entrepreneur, and he had even survived the internet. This, however, was the first time he had been flirted with.

“I’m surprised. People usually only hang out with me so they will have even numbers,” he said shyly.

“My calculations find that two is an even number,” D.O.D.E. replied, looking him directly in his non-existent eyes.

She continued, “Would it be okay to ask you a question to help me divine your true character?”

“Is it okay if my answer rhymes? Kind of?” Gene-Bot replied.

D.O.D.E. shook her entire body up and down to indicate yes.

“Can I also get a noun?” Gene-Bot prompted.

“Lust,” D.O.D.E. replied (tired of playing games even if they were entertaining party games) and then she asked, “How would you describe yourself to a potential love interest?”

Gene-Bot processed what she was actually asking. There was nothing fake about her prompt. So, he stepped up to the mic and said:

I’m a non-player character you can TRUST.”

And with that, the two devices synced.