Running Your Own Jackbox Tournament 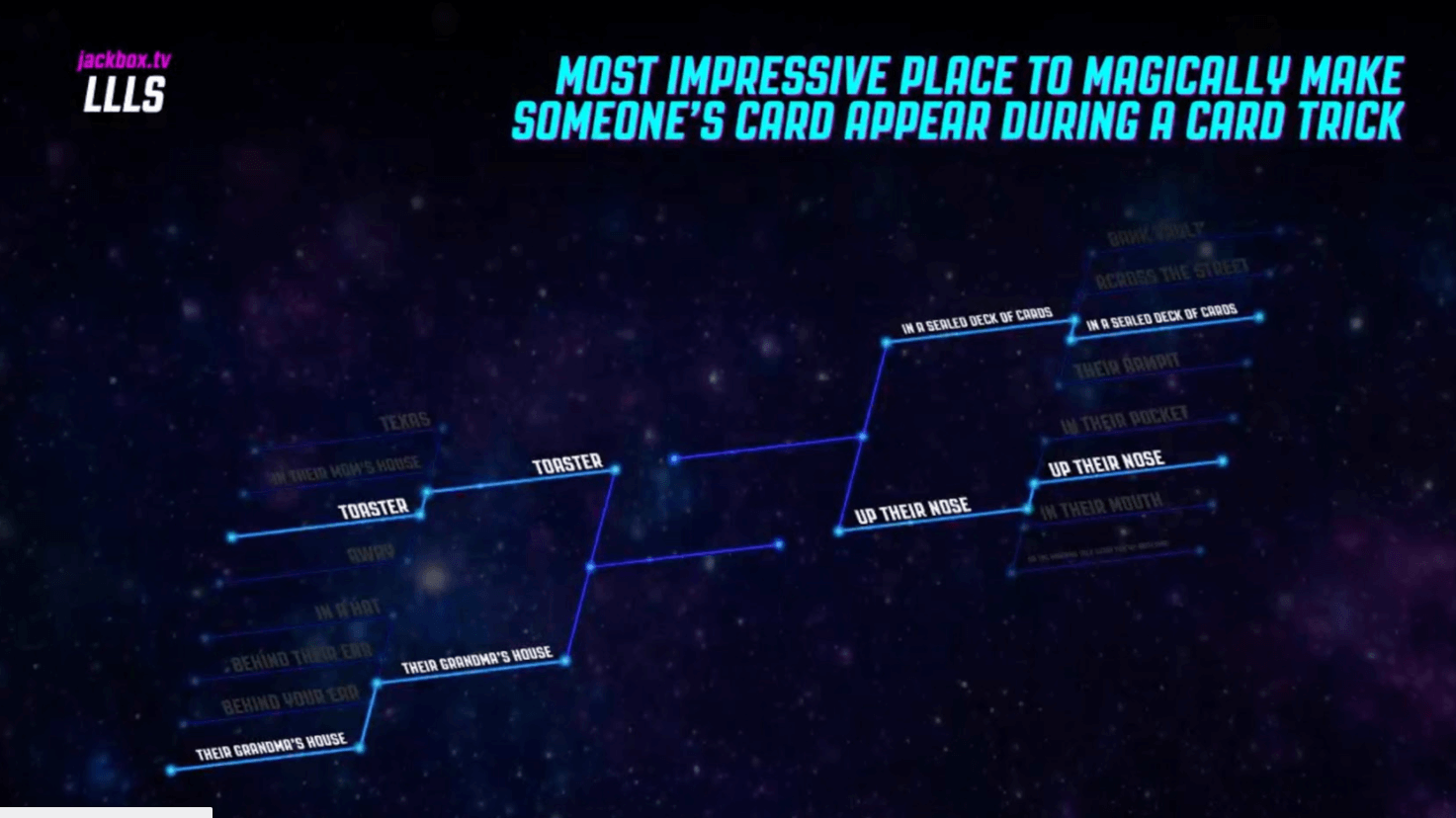 The games that we make here at Jackbox are perhaps best known for the casual couch co-op experience that our fans have come to expect. Our games are a nice relaxing way to create weird memories with your friends, family, coworkers, clever pets, and strangers on Twitch. But what happens when you’re a fiend for competition? What do we do with those friends who won’t play games unless there are high stakes involved?

Today we’ll be taking a look at how to turn your Jackbox game night into a tournament experience.

Before starting a tournament, you’ll need to consider the format. There are a few variations to try out such as single elimination, double elimination, round robin, and variations on those themes that include teams or single players.

Organizing tournaments is easy with the right tools. Websites such as Challonge.com or Smash.gg make it easy to set up a formal event or one-time tournament. You can see an example of a Challonge tournament we set up here.

Jackbox streamers from our Twitch Team have had success with Mad Verse City competitions. This tournament basically writes itself. Have your contestants duke it out in the game. At the end of the round, the player with the most points wins.

One special challenge for us here at Jackbox is getting as far as you can in Bomb Corp. (Bomb Corp. supports 1 – 4 players). Structuring a tournament around who can get furthest in the game will be a good challenge with well-deserved bragging rights at the end. If you do decide to play this game, show us how far you’ve gotten with a screenshot on Twitter!

Perhaps the most obvious Jackbox title to play for a tournament is Bracketeering. In Bracketeering, up to 16 players can compete to formulate the strongest opinion about the stupidest things.

Another popular approach for organizing a tournament is to play every game in a Party Pack, or heck even our entire roster of games if you’re feeling bold. Put your contestants on the bracket to determine who is the best in a given category, Party Pack, or all around champion.

Regardless of how you organize your Jackbox tournament, be sure to send us your livestreams by Tweeting at us when you’re ready to go live.

We currently have a competition going! Learn more about entering the Lash Madness competition here, and check out the newest Quiplash 3 episode only on The Jackbox Party Pack 7.