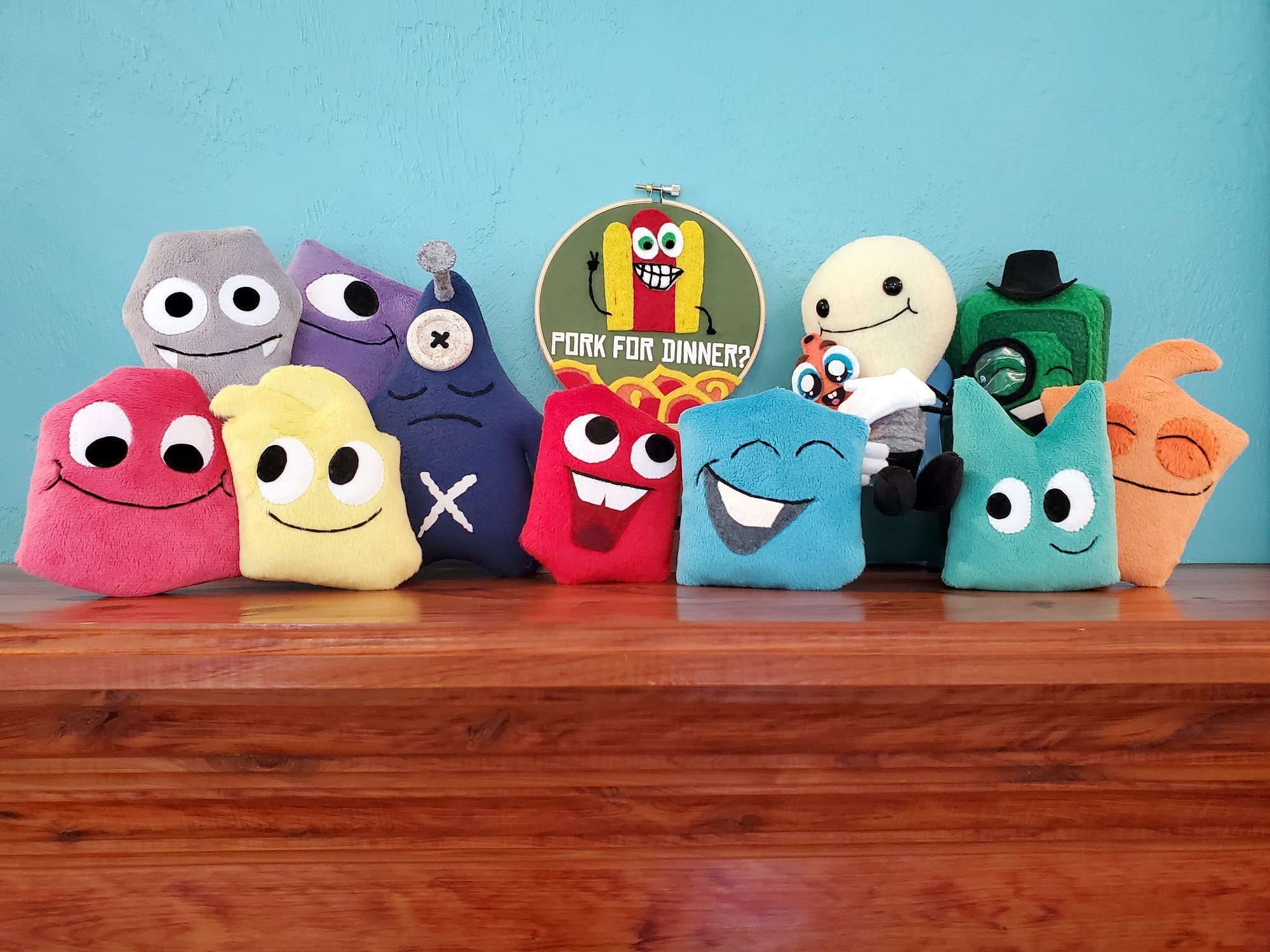 When we started releasing images of the dolls of Trivia Murder Party 2, we couldn’t help but notice a House of Darkly tweet around that time teasing a new plush being created featuring a button. Our whole office shared the tweet in Slack wondering, “Could it mean that House of Darkly is creating a plush about The Believer?!” We hoped and crossed our fingers and lo and behold:

This is one of the many reasons why we love House of Darkly so much. You can check out more amazing House of Darkly creations at her website here. Read on to learn more about one of our favorite fans!

I started with You Don’t Know Jack (the first one) when it came out; I have a vague memory of seeing a blurb about the game in a magazine, probably MacAddict which I used to read cover-to-cover. I have conferred with my older brother and we’re pretty sure we bought it in an actual brick and mortar store, either Electronics Boutique or CompUSA. I played it pretty compulsively, against him, my mother when we could rope her in, and just solo. None of my classmates knew what I was talking about. I was deeply obsessed (little has changed, including my cries of “argh” when it was going to be a gibberish question).

Honestly? I came to the streams for Seaman nostalgia, and it was a slippery slope from there. But really, Jackbox came back on my radar with gusto because of Hello From the Magic Tavern, though I never forgot about the games. I kept my original CD-ROMs, long past the point where I had a computer that could use them. Cookie’s voice is indelibly burned into my brain.

The streams were a big deal for me; I work from home, so I plan my hand sewing work so I can justify watching as motivational accompaniment. I really appreciate having the Jackbox folks and their chat as company, and I have gotten extremely good at working, chatting and still playing audience on my phone at the same time. Having time to think creatively in a different way helps me with my art, too. I don’t live close to my friends, but we’ve been able to use a party game to make the party wherever we are; hosting Jackbox night over Discord or playing together in a convention hotel room. Jackbox helps us create a virtual party, a liminal party space if you will. And everyone at the company has been so kind and supportive about my work, which is an amazing feeling because it’s highly mutual. Especially since we’re so close to a time when “gaming” as a concept often tried to present itself as closed drawbridge on a castle with a moat and a lot of angry spikes. A big, colorful bouncy castle with a sign reading “the more the merrier” is very welcome, and makes you want to check out the rest of the carnival too.

And also someone at the company who knows who they are gave me an easter egg in the Party Pack 5 YDKJ, which was uncovered under such hilarious circumstances and felt so surreal that neither I nor my witness were completely sure it had actually happened. For the record, never assume and then say out loud as the game is launching that it’s okay if you do poorly at trivia because Cookie doesn’t know your name. He might.

It really depends on the mood I’m in, and who I’m playing with. I genuinely enjoy all of them; even Zeeple Dome, which I continue to be fairly bad at. But I have the deepest connection to YDKJ. It was so different than anything else I was playing at the time, and made a huge impression. Most of those games were very self-serious, which was fine; but I grew up playing things like the Hitchhiker’s Guide text adventure and I missed that playful, vaguely antagonistic relationship with a game. I do still have an immediate heart rate increase at the start of the Jack Attack and instinctively lean closer to the computer, even when I’m just watching friends play. And despite that familiarity, I feel like I’m always finding something new the more we play.

I try to tailor that recommendation to the person I’m trying to convince; I think there are enough varied games that there’s a perfect “in” for pretty much everyone. Everybody knows which friend is the trivia nerd who likes to swoop in with a fact or correction; so for them YDKJ or Fibbage is a good choice. Split the Room or even Patently Stupid work for family members who might not quite know what they’re supposed to do. Art friends are perfect for Drawful or Tee K.O. (though I really like putting people who “can’t draw” in the drawing games). Quiplash is an excellent go to for larger groups when there’s not an obvious leaning. Once you’ve established who the stone-cold weirdos are, then you go for the deeper-cut games.

You can’t compliment me in an interview question, that’s against the law! Larry King will be kicking in your door any moment now. Also this question is a trap, because that really is a “favorite child” type issue, though I’m just now realizing it’s possible parents do have favorite children and all of us who aren’t only children have been lied to. But I do feel that way, and since I definitely have others on my list my answer might change. The Quiplash pals are very joyful as a group and extremely soft, and I put by far the most hours into the YDKJ 4s (which were produced for internal use so I didn’t keep a prototype). Maybe the Patently Stupid lightbulb, because it’s not how I’d normally design a character, but it’s just so chill. I do worry a little bit now, in hindsight, that I’ve let on that I’m a pushover when it comes to peer pressure to make Jackbox plush and I’ll wind up buried in them!  But there are worse, and significantly less cute, ways to go!