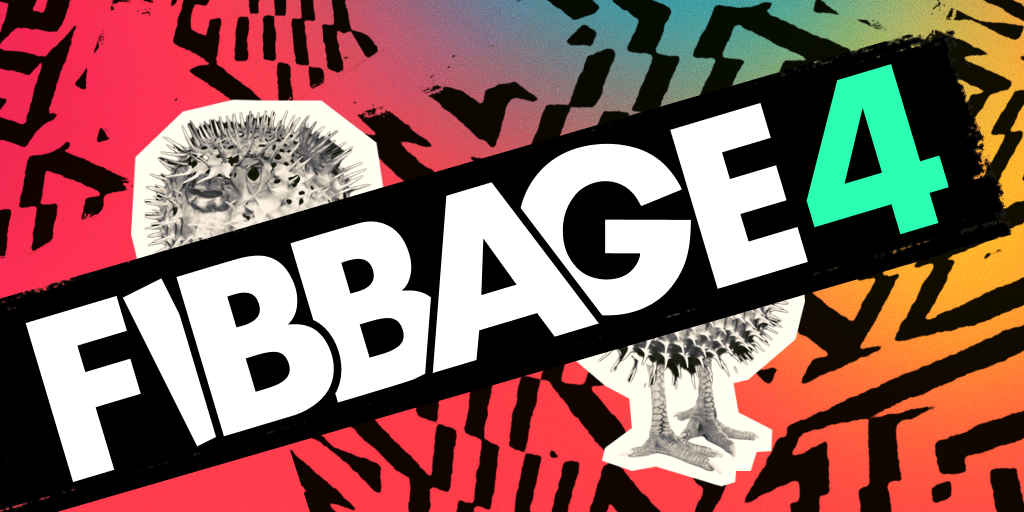 We’ve made a lot of party games at Jackbox, but we finally found one we liked enough to slap a four on it.* That’s right, Fibbage 4 is coming this fall in The Jackbox Party Pack 9 and it’s got a truckload of exciting features, including:

In short, we think this is going to be the biggest and best Fibbage yet. And to make it, we need your help. Let’s talk about those fan questions we mentioned…

WANNA BE IN FIBBAGE 4?

In case you need a refresher, Fibbage is the irreverent bluffing game from the long-running Jackbox Party Pack series. Players get a true fact with a key word or phrase blanked out. For example:

A man in Shaanxi, China was shocked to find out that the thing he had been using as a nutcracker was actually _____.

Players enter lies that fit the blank to fool the other players. You get points for spotting the actual truth (in this case “a hand grenade”) and for tricking people with your lie.

But why should that guy in Shaanxi have all the fun? We bet you’ve found something odd in the woods, learned a shocking secret about your hometown, or ended up in a completely ridiculous situation. Everybody’s got their go-to “strangest thing that ever happened to me” story, and we want yours.

Fill in this form with your crazy true story. If we like it, we’ll get in touch and ask you to record your fact as a Fibbage question with your phone’s selfie camera. If we use your video in the game, you’ll get the ultimate Jackbox prize: copies of all eight Jackbox Party packs. Later this fall, you’ll get a free code for The Jackbox Party Pack 9 starring you!** Plus you’ll get to see your name in the credits!

YOUR FACT MUST BE…

WHAT MAKES A GOOD FIBBAGE FACT

Here are some examples of the kind of strange facts we’re looking for. The capitalized parts are where we would put the blanks for players to guess. These examples are made up, but remember: Your fact must be true!

Last year, my family found a box on our porch with no return address. When we opened it, we found AN OX SKULL. It turned out the package was meant for a biology professor who lives up the street, but it was pretty freaky!

At my grandma’s funeral, I leaned over and accidentally dropped A TAMAGOTCHI into the casket. I don’t think anyone noticed. I hope grandma is feeding him in heaven.

In middle school, my first boyfriend broke up with me because he said he didn’t trust people with PET HAMSTERS. He refused to explain any further, but I clearly dodged a bullet.

My dad was banned for life from our local hardware store, because the owner found out he hated FRASIER. That was his one line and dad crossed it.

There’s a statue in the center of my hometown of A BEAR HOLDING A GUN. I have no idea what it’s meant to symbolize but it’s beautiful and people put hats on him sometimes.

HOW DO I ENTER AGAIN?

Click the button below and fill in the form! And remember to follow all instructions. Good luck!

* Okay fine, other than YDKJ: THE RIDE.

**Prizes given out in the form of Steam codes, redeemable on PC, Mac, or Linux.