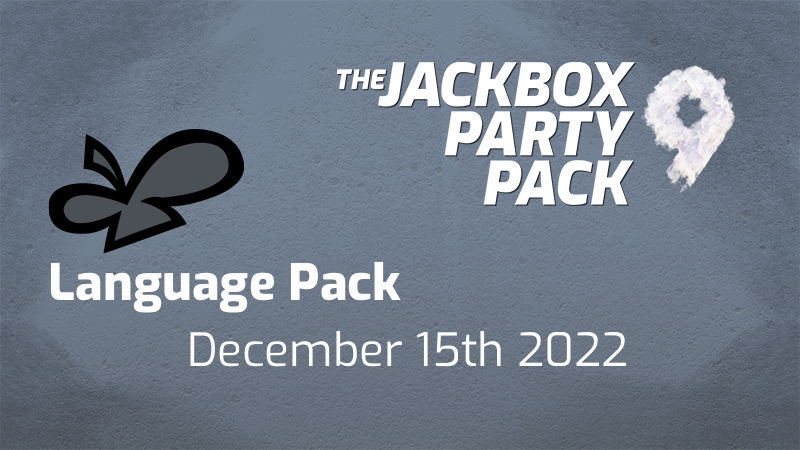 We’re thrilled to announce that The Jackbox Party Pack 9 is now available fully localized in French, Italian, German, Latin American Spanish and Castilian Spanish as part of our Language Pack update. We’ve fully translated these games in every way – from the settings menus to the end credit songs after each game! You will soon be able to Roomerang en en español and Quixort auf Deutsch.

The Language Pack is part of a free update to The Jackbox Party Pack 9.

Making more of our games available in additional languages has always been our goal. For the first time ever you can enjoy a full Party Pack available in more than English!

Let’s take a look at our progress over the years:

On April 8th 2020, Jackbox Games released Quiplash 2 InterLASHional, a game which took Quiplash 2 and gave it a robust update in four new languages. In 2021, we updated Drawful 2 in French, Italian, German and Castilian Spanish. Then, in the summer of 2022 we released The Jackbox Party Starter, a collection of three of our more popular games fully localized from top to bottom in all previous languages plus Latin American Spanish. Now we’re localizing The Jackbox Party Pack 9 for our non-English speaking audiences!

To play, simply update your copy of The Jackbox Party Pack 9 on Steam, Xbox, and PlayStation. Nintendo Switch customers can enjoy this free update in January 2023.

When will we see a Jackbox game in Latin?

It’s really difficult being funny in English, and translating our humor into other languages compounds the challenge. We’re starting out with French, Italian, German and Spanish because we have existing demand in those languages. If we see broad support for other languages, we will certainly consider adding to our language options! Latin is really unlikely though, sorry.

Will you update past games to support these language options?

This isn’t currently in our plan, though we never say never. We will continue to add more languages beyond English to new releases moving forward.

I noticed an error in this translation?

Hey, that’s not a question! Still, we always love to hear your suggestions. Please submit a ticket over at help.jackboxgames.com. Screenshots are always helpful for this type of feedback.