Play These Jackbox Games on Halloween… If You Dare 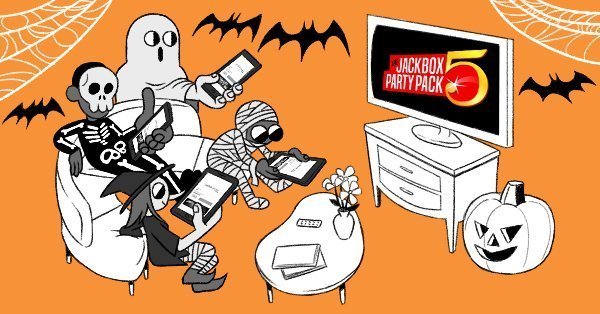 Oh, hello! Your car couldn’t have broken down in a more fortuitous spot. I mean, what are the chances it would happen over these road spikes outside my house? I was hoping to get a few more guests for this night of Jackbox party games! It must be fate!

Quick, come in from the rain! The storm is supposed to last for hours and there are so many spooky and delightful games we can play.

One does not need a cavernous mansion like mine in order to create a chilling eve of ghoulish giggles and horrific puns. All you need is Jackbox Games and a strong stomach (because of the sheer number of belly laughs)! Haha what?! NO, that’s not a corpse in the corner! Quick, look at these games on the TV screen!

This terrifying trivia game is hosted by a deranged serial killer—which is definitely not a role I can relate to whatsoever.

You are a kidnapped contestant who’s forced to participate in a sick and demented game show. In order to survive, you’ll have to demonstrate both book smarts and street smarts. If you get a question wrong, you are dragged to the Killing Floor, where you fight for survival in a variety of cutthroat mini games.

The action culminates with an intense race to escape. Can you get out alive? There’s only one way to find out… (By playing the game. Sorry, was that not obvious?)

What’s scarier than being chained up in a dungeon? Being stuck in a nebulous void.

In this game of bizarre hypothetical scenarios, you create unworldly situations with the goal of splitting the room’s response. You hold the power as your force your opponents to play out terrifying (but amusing) scenes.

Anything is possible in this multidimensional party game; it’s only limited by your creativity. And isn’t your imagination the scariest place of all?

This party game combines two of the scariest things in the world: monsters and online dating.

Monster Seeking Monster is a strategy game where you try to woo your fellow creatures of the night via text messages. But be careful who you date. Every monster has secret skills that can harm your chances of winning.

….both of those prompts are a little bit sinister, but very relevant to your current situation.

Pick up one of these games to enjoy during your Halloween party now. And don’t forget to purchase The Jackbox Party Pack 5 when it is released on all major digital platforms on October 17th!