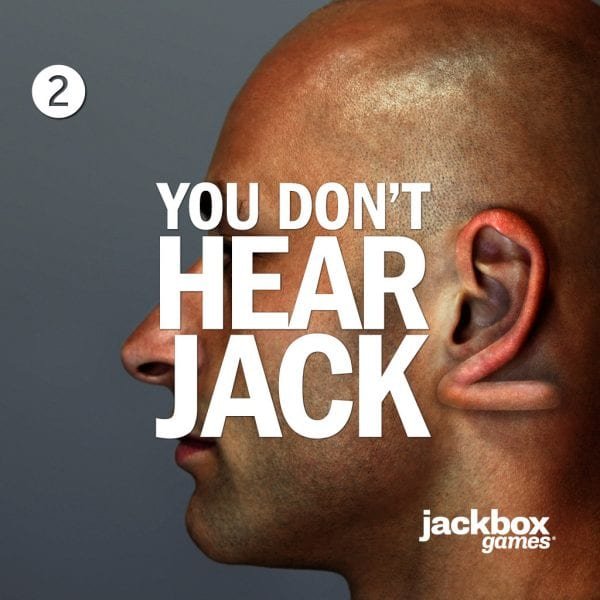 The release of the latest iteration of YOU DON’T KNOW JACK is just around the corner, and with it comes a legion of new commercials for you to love and cherish! While we tie up loose ends for the new game (coming soon in The Jackbox Party Pack 5), we thought we’d share which ones are our favorites from You Don’t Hear Jack Vol. 2. Click here to listen to each one!

“To me, Don’t Say Pajamas! is a perfect example of a YDKJ commercial. It’s got a ridiculous premise, lots of sound effects, and a great punchline. And the host is named Terry St. Pancakes for no reason at all. What more could you want?” – Ryan DiGiorgi, Game Director/Editor

“I love this one. It seems like it was written for Tim Sniffen and Steve(o) Heinrich, because… I guess it was. My favorite part is “…the highs, and lows of Carpet…” because it sounds like Steveo is literally choking on shag carpet by the end.” – Allard Laban, Chief Creative Officer

I found the email where Arnie sent me the initial script and he had it pretty much exactly like the finished commercial but it didn’t really have an ending. I replied, “It’d be great to work in something like, ‘And remember, if Vance VanVan’s Van lot’s a-rockin’, be sure to stop in… and buy a van.” He added that and then added “… from me… Vance VanVan,” which just made it 100 times funnier. Also of note, my youngest kid, who was eight at the time, read the line “Hey Vance, what’s that weird burning smell?”” – Andy Poland, VP of Audio and Editorial

“This commercial parody always made me laugh. A great premise that just keeps topping itself. No matter how many times I listen to it, I still can’t do the math and figure out how the deal works.” – Dave Innis, Art Director

“It’s really hard to pick just one, and while I love the final line in High Horse Coffee, I’ll have go to with Stanton’s Rhyming Dictionary. I remember taking way too long to figure out what was going on when I first listened to it, but now this goofy joke gets me every time. Also, Garow is a great name.” – Evan Jacover, Chief Technology Officer

Stay up-to-date on the latest information about The Jackbox Party Pack 5 by following us on Facebook, Instagram, and Twitter! And, enjoy more music and sound from Jackbox Games on our Bandcamp page.

Which YOU DON’T KNOW JACK commercial is your favorite?