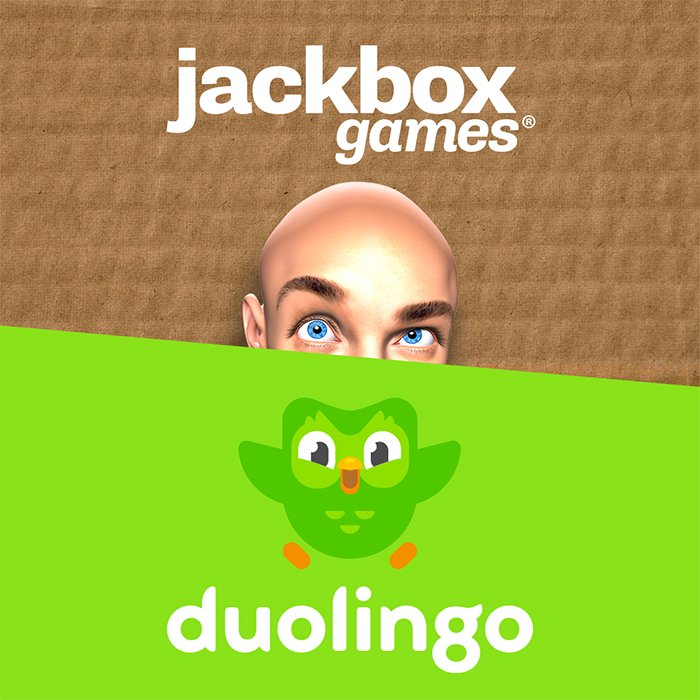 Gone are the days of memorizing phrases like “el libro es rojo” for your high school Spanish test, only to forget it weeks later. How will you ever get around Madrid without knowing how to say “the book is red”?!

With Duolingo, language learning is easier and more accessible than ever. But how do you know when you’ve started to master a language? Maybe when Duo sends you that sweet, sweet one year streak notification. Or maybe when you’re finally proficient enough to make a joke in a new language. That’s where Jackbox comes in.

Duolingo and Jackbox are teaming up to provide you with the ultimate fun language learning experience.

When you purchase a Steam code for The Jackbox Party Starter through the official Jackbox Games shop, we’ll send you a unique code for two months free of Super Duolingo. That’s two free months of high-quality language learning!

Laugh your way to fluency with The Jackbox Party Starter – including three hit party games in English, French, Italian, German and Spanish. Then sharpen up your skills using Super Duolingo. You’ll be playing Jackbox party games with hot Italians* in no time.

*Hot Italians not included in this promotion.

In Tee K.O., players will draw random drawings and write random phrases that could go on a t-shirt. Those drawings and phrases will be scrambled up and sent to other players’ devices. You’ll choose your perfect t-shirt design pairing, and send your wild new designs to battle in a head-to-head challenge. And for an extra treat: you can order those shirt designs after the game! Play the game with new friends in your Parisian hostel, and order a shirt as a souvenir!

When playing Trivia Murder Party 2 in a language you’re learning, you’ll be challenged on your language AND trivia skills. And some other really random skills that will come about during minigames. Test your knowledge and survive a murder hotel in this high-stakes trivia game.

In Quiplash 3, players answer a series of prompts. Responses compete in a head-to-head battle of the wits: a true test of both your language and comedy skills. Quiplash 3 comes with the ability to create custom episodes, meaning you could create custom episodes in languages that we haven’t yet released. In the settings menu of the game, you can access featured content, like special holiday-themed episodes and even, that’s right, a special Duolingo-themed Quiplash episode.

When you launch the special Quiplash 3 episode titled: “Language Laughter With Duolingo,” you’ll answer prompts like:

Purchase a Steam code for The Jackbox Party Starter, Drawful 2, Quiplash 2 InterLASHional or The Jackbox Party Pack 7 before September 8, 2022 to receive a special discount code providing you with two free months of Super Duolingo. Sharpen those language skills and get ready to play the Duolingo episode of Quiplash 3.

Practice your language skills and play The Jackbox Party Starter with new friends abroad! You’ll have a pack of German groupies rolling on the floor with laughter in no time*.

*German groupies not included with promotion.