Impress Your Crush at a Holiday Party With These Five Games 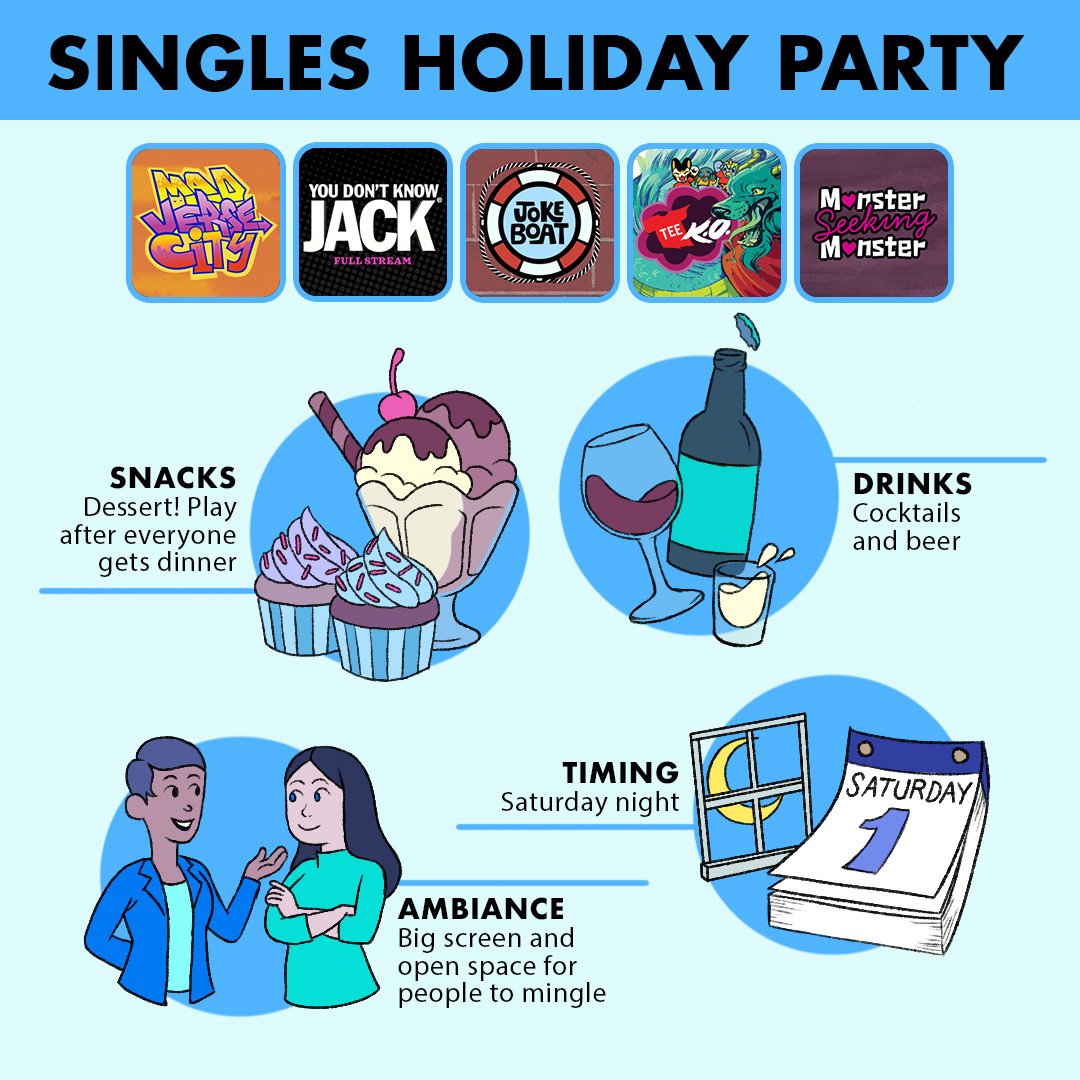 It’s the holiday party season, which, if you’re single, can be a bit daunting. Daunting enough that you may be tempted to hide in the world of IG story instead of striking up conversation. But what if I told you that you can stay on your phone while still sending out vibes to the attractive person in the ugly sweater across the room?

Let me introduce you to Jackbox Games, the developer behind a lot of fun and accessible digital party games. The games are displayed on a TV, while players use their phones (or any device with an internet browser) to write and draw their answers. Here are five of our favorite games that each show off a different skill-set.

Is there anything more attractive than a great sense of humor? Ok, maybe a really hot bod, but being funny sure helps. In Joke Boat, you get to flex your comedic muscles by writing hilarious one-liners. Finally, all that time you’ve spent on Twitter can pay off. The funniest joke writer wins, both in the game and in the dating pool.

The quickest way to one’s heart is through poetry. The second quickest way? Writing robotic rap battles. Mad Verse City sets you up to write savage rhymes that get performed by your robot avatar. If you’re the last one standing in this competition, you won’t be alone for long. Eat your heart out, Pablo Neruda.

More of an artist? Then Tee K.O. is here to make you shine. In this game, players create random drawings and phrases. Everybody then combines the funniest pairings to put onto a t-shirt. Even better? You can actually buy yourt-shirts at the end of the game! Talk about a cute story you can share with your children (while in matching outfits).

If your crush is a sapiosexual, you’ll want to seduce them by showing off your knowledge. Playing You Don’t Know Jack: Full Stream is a great way to do that. In this twisted trivia game, you’ll get asked clever questions like, “If Chance the Rapper got a job in statistics, what would his new moniker be?” If you know the answer is Chance the Actuary, then chances are you’ll be great at it.

Let’s face it, flirting is an art. If this is a strong suit of yours, you’ll definitely want to play Monster Seeking Monster. It’s the best way to slide into someone’sDMs because it’s actually part of the game! Your objective is to strategically set up dates with other monsters, while deducing who has what hidden powers. In a lot of ways, it mirrors real dating. It’s the perfect primer for the real thing.

There are plenty more Jackbox games to discover, but these should give you a good place to start. Most Jackbox Games titles come bundled in one of the company’s Jackbox Party Pack collections. Check out jackboxgames.com/games for more information on how to purchase and play. Now get out there and show your game!