Champ’d Up: Slam Down is a unique two-player card game where each player takes the role of a trainer battling champs against their opponent until only one player is left standing/sitting!

Each turn you will recruit champs from your hand into the ring to fight your opponent’s champs. Deplete your opponent’s reserves and call them out to declare victory and win the game! Each pack of Champ’d Up: Slam Down! cards comes with 15 champs and 3 trainers, everything you need for a full 2-player game. Here’s how to set up the game:

Feel free to mix, match and combine card packs, picking from a larger set of trainers or using more than 15 champs in the deck. Players will take turns until a player wins the game. The player who is taking a turn is referred to as the “active player.”

At the very start of their turn, the active player gets 3 energy

. Energy does not carry over from turn to turn, so spend as much as you can!

Next, the active player must draw 1 card from the top of the deck and put it in their hand.

Lastly, if the active player has any champs in the ring with “Survivor:” abilities, or “Ongoing:” abilities that reference the “start of your turn,” those abilities resolve now.

Now it’s time to take actions! The active player can perform the following actions in any order, as many times as they like:

The rules for taking all of these actions are a little further along, so keep reading!

THE FIRST TURN RULE: The first player to take a turn cannot fight, activate their trainer’s “Special:” ability, or call out an opponent 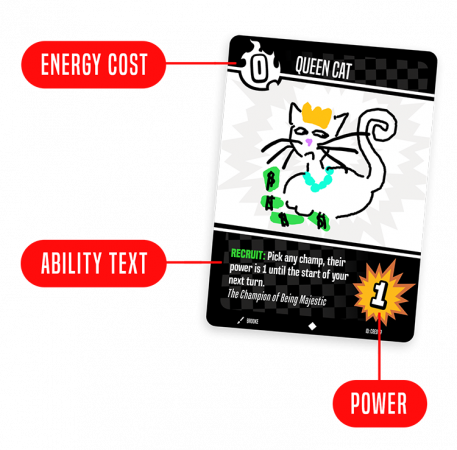 When the active player is done with their actions, they end their turn as follows:

If the active player has any champs in the ring with “Ongoing:” abilities that reference the “end of your turn,” those abilities resolve now.

If the active player has more than three cards in their hand, they must discard champs of their choice until they only have three.

If you’d like, use tokens each to represent energy

(these can be pennies, precious jewels, or whatever you have on hand). When you spend energy

to hype up champs, you can use these tokens to keep track. 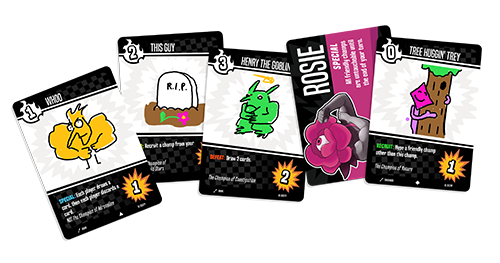 The goal is to empty your opponent’s reserves and have a champ deal the final blow.

The first player to Call Out their opponent when that opponent’s reserves are empty, WINS THE GAME.

When the Deck Runs Out

During play, the deck of champs will run out. When that happens, simply take the face-up discard pile and flip it over so it is face-down, forming the new deck. Do not shuffle the deck. Continue play as usual.

Very rarely the deck might run out when the discard pile is empty, when this happens players will skip the draw phase and ignore any card abilities that utilize the deck or discard pile.

Champs each have an energy

, and an ability. The energy

cost displays how much energy

the active player must spend to recruit that champ. A champ’s power

is compared to an opposing champ’s power

during a fight to determine the winner. A champ’s ability text explains any effects that champ might have on play.

The small icons at the bottom of the champ cards identify if the champ was a winner (★), hero (♦), or underdog (▲) in the Champ’d Up game. 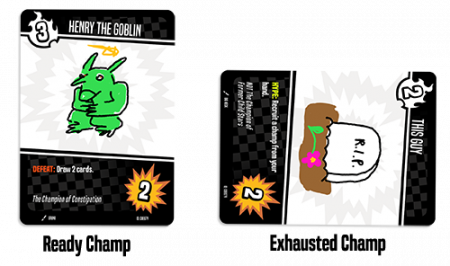 Recruiting a champ is the action of placing a champ in the ring. Champs can be recruited in two ways:

Once a champ is recruited, if they are in the ring, they can immediately be used to fight, trigger their “Special:” ability, or call out an opponent. If that champ has a bold “Recruit:” ability, that ability resolves as soon as they are recruited.

A champ can only be recruited if there is room in the ring. Each player can have a maximum of three champs in the ring at a time.

The active player can hype friendly champs in the ring, which increases a champ’s power

for the duration of the active player’s turn.

To hype a champ as an action, the active player picks a friendly champ in the ready position and spends 1 energy

to hype them. When an ability instructs a player to hype a champ, they do not pay energy

Each time a champ is hyped, their power

increases by 1. If that champ has a bold “Hype:” ability, that ability resolves each time they are hyped.

Players can hype as many times as they can afford, and in any combination – hyping the same champ multiple times or multiple champs. All champs that are hyped revert back to their standard power at the end of every turn and are no longer considered hyped.

If a defeated champ has a “Defeat:” ability, or a champ with an “Ongoing:” ability references “when a champ is defeated,” those abilities resolve now. If more than one champ would have an ability resolve, the active player chooses the order in which they resolve. The active player puts the defeated champs into the discard pile in their preferred order.

Champs each have abilities that affect play. These abilities might help you draw cards, boost friendly champs, defeat opposing champs, and more!

The golden rule when attempting to resolve a champ or trainer’s ability is to do exactly what it says on the card, word for word. You might not understand why a card is helpful, or what sort of outcome might come from an ability. Regardless, perform it step by step. If there is ever more than one ability that would resolve at the same time, the active player chooses the order in which those abilities resolve.

Champ abilities each start with a bolded word followed by a colon – like “Recruit:” – this is called a trigger. Triggers signify when an ability will occur. When a champ’s ability is triggered, the champ’s owner must resolve that ability.

While resolving a champ or trainer’s ability, players must resolve as much as they can and ignore anything that they are unable to do. For example, the active player recruits a champ called Big Chungus with the ability “Recruit: Defeat an opposing champ, then draw a card.” If their opponent has no champs in the ring, they will ignore that part, then they will draw a card. Each player has a trainer card with a “Special:” ability that can be activated as an action during the active player’s turn. To use a “Special:” ability, the active player exhausts their trainer (turning it vertically) and resolves the ability. You cannot use the Special ability move again until the trainer is readied. Trainers return to the ready state after getting called out, NOT when your turn ends.

To call out an opponent, the active player exhausts a friendly champ in the ready position, then razzes their opponent like a wrestler might. If the player who got called out has champs in their reserve, they reveal the champ of their choice and draw them into their hand and ready their trainer card if they are exhausted. If the active player calls out an opponent with no champs in their reserve, they win the game! 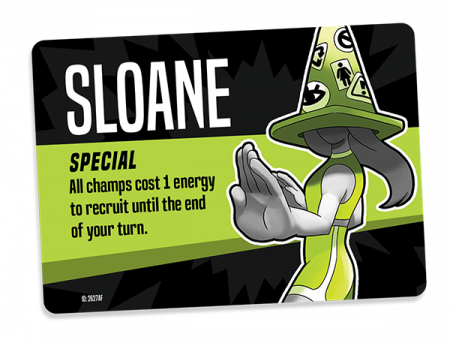