Behind the Scenes of Roomerang: Dev Diary #3 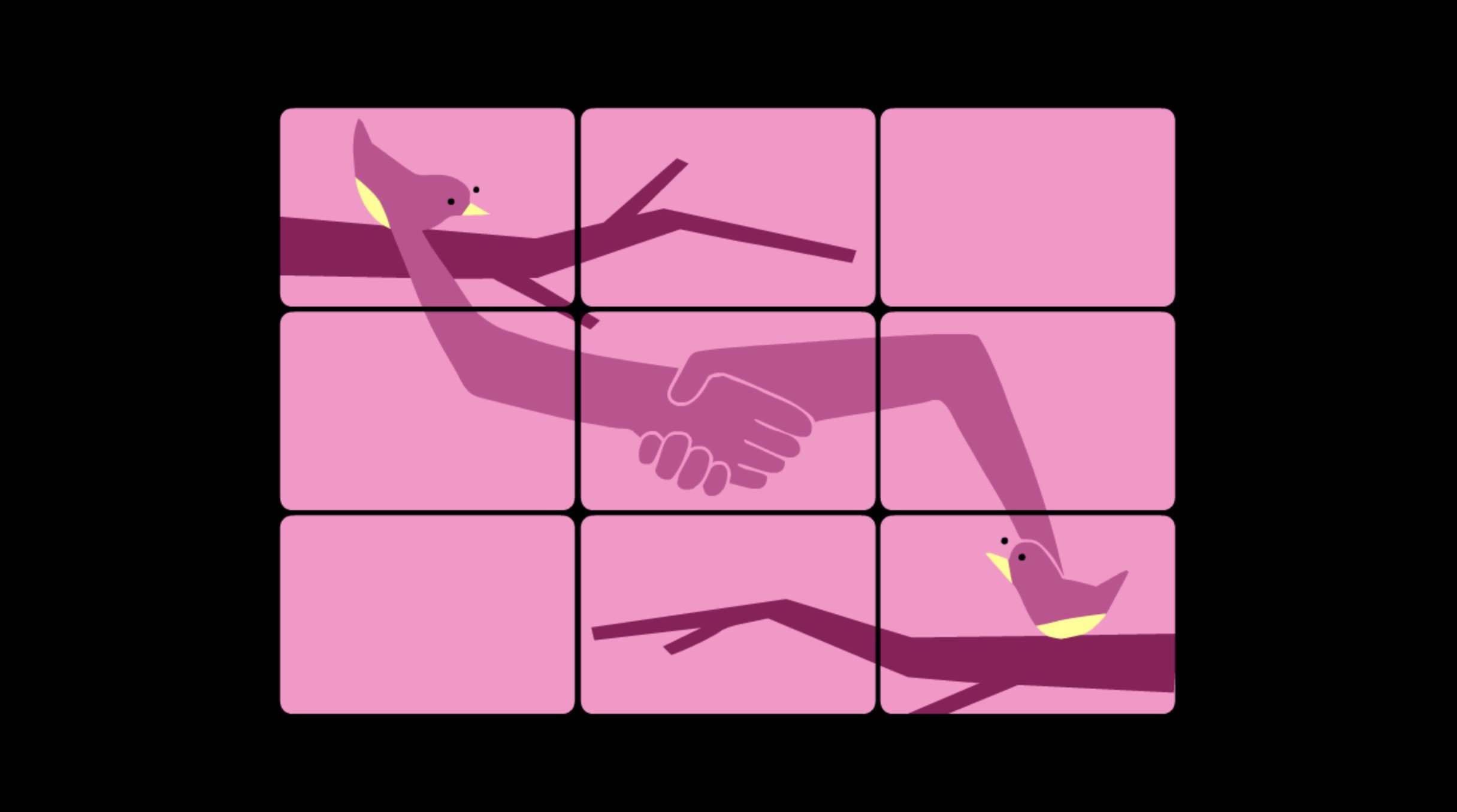 In case you missed it, one of the new games in The Jackbox Party Pack 9 is Roomerang!

Throughout the summer, we’re sharing more about the process of creating a party game than we ever have before with the Roomerang team. You can read some of our past dev diaries from the devs working on the game here and here.

We’re also doing a monthly stream with our community where we actually play through a work-in-progress build of Roomerang and discuss the progress that’s been made over the course of the month. You can find videos of those streams in this YouTube playlist.

Wait, there’s more! We’ve also been creating TikTok content that dives deeper into each person’s role on the team itself. You can watch the latest one with Lead Engineer, Farhan Noormohammed, here.
Roomerang, the salacious reality TV party game, involves responding to prompts, role-playing, and whatever level of competition and drama you bring to the table. Read on to hear more about the game from the devs themselves!

What is the most fun part about the stage you’re at in the development of Roomerang right now?

“The game looks and sounds SO GOOD. A lot of art and audio is coming in as we have more defined gameplay moments, so the world of Roomerang is becoming more rounded and beautiful with each passing week.

Our host is in the game now, so hearing her voice walk us through the moments makes it so much easier to see where we still need clarification or instruction, in addition to just giving the game such a unique personality. We are playing the game a lot as a team, and we are constantly laughing…which is a GOOD SIGN.” – Brooke Breit, Game Director

“This is the hard/fun/useful part of production where the game’s scope (what goes in and what won’t make it, essentially) becomes clearer and clearer, on nearly a daily basis. This involves great sacrifice but also is also regularly a relief, as we embrace what core elements of the game unequivocally work. Creating workplace feuds through regularly playtesting is the icing on top!” – Alex Weick, Designer and Producer

You’ve been doing some playtests with partners and revealing play-throughs during episodes of Inside the Box. How has this impacted the development process?

“We had an incredibly productive playtest with the brilliant and insightful folks over at Rob Has A Podcast (a podcasting network that dives into all things reality tv and so much more…please check it out, some of us on the dev team are superfans). We played a work-in-progress version of the game. It was so exciting to see that group dive into the strategy element and embrace the heated conversations that pop up around aligning with other players, protecting yourself, and generally going after each other. After the game, we talked about what they would love to see more of in the game, and a lot of their feedback shaped some of our design decisions, including how individual scores are communicated to players.

Also, our monthly streams have been such a wonderful addition to our traditional dev process! Getting to show off half-baked ideas and in-progress work, knowing that our audience understands that this isn’t a final product, is a total blast. And we get to see comments in the chat asking the same questions that we’ve been asking ourselves. For example: ‘Will players get to select their own avatar?’ Sometimes we have answers to those questions… We are working towards players selecting their own avatar! Other times, it’s a great reminder of what kinds of things are important to our community.” – Brooke Breit, Game Director

Is there a moment in the game that’s been most difficult to crack?

“Can I say everything? I won’t say everything, that’s not true. HAHAHAHA, EVERYTHING IS FINE. But seriously, we have been trying to figure out the right balance of time and focus in the moment after a player is eliminated and when we are displaying the votes and reasons why people voted them out. In internal playtests, folks have brought up that they feel like they really want to read everything on screen, whereas, we originally thought that moment was less important. It was more of a silly moment to write things that didn’t necessarily affect gameplay (you aren’t voting on those reasons like in challenge rounds), so we didn’t want to spend too much time there, or show all of those votes/reasons one by one like we do in challenge rounds. So, we are currently playing with different ideas that would draw your focus where it needs to be without “overstaying our welcome” in that moment. Internal and external playtests are extremely helpful in highlighting the moments that are truly working and the ones that still could use a little love.” – Brooke Breit, Game Director

“I think many reality shows struggle to make the meat of episodes –  the challenges and deliberation – consistently compelling. On the contrary, eliminations tend to be easy to produce. They’re hotly anticipated and inherently dramatic. Along these same lines, we’ve rarely struggled to make eliminations compelling, but making challenges/advantages/voting clear, cogent, and fun is occasionally challenging! What you don’t see on reality shows is the 20 minutes of contestants arguing with producers about challenge rules. In that vein, we need players to understand and inflect on twists with great ease, which requires lots of playtesting and tweaking.” – Alex Weick, Designer and Producer

What reality TV have you been watching lately?

“I’ve been watching RuPaul’s Drag Race All Stars 7, which serendipitously happens to mirror our scoring structure in a few ways. No eliminations, but benevolent and punitive advantages doled out to players. It’s interesting to see those contestants try and sometimes fail to dole out their advantages strategically. (RuPaul’s advantages) include the “platinum plunger” and bonus “legendary legend stars” to give to others. Watching the pros and cons of their formula play out (easy for producers to narrativize, but savvy contestants lead to lots of stalemates) is interesting, and gives a good reminder about what kind of surprises work on reality TV.” – Alex Weick, Designer and Producer

Are there any reality TV stars who would be at the top of your list to play Roomerang?

“There are a lot of wonderful personalities on this last season of season 42 of Survivor that I would LOVE to see play this game. During that season, they showed such joy and appreciation for gameplay, that I think they would have a lot of fun with it. There’s also an inexhaustive list of former Survivor, Big Brother, and Drag Race players that would be so much fun to watch playing Roomerang. – Brooke Breit, Game Director

If a fan asked you how to “prepare” to be a good Roomerang player, what would you tell them?

“Truthfully, my hope is that contestants don’t have to prepare to play our games beyond reading the instructions that are before them. That being said, a pro tip is to register who will be visible threats and silent threats – who will probably dominate on their face and be a topic of discussion, and who will lurk in the background, racking up points but speaking very little? One must target both of them to win!” – Alex Weick, Designer and Producer