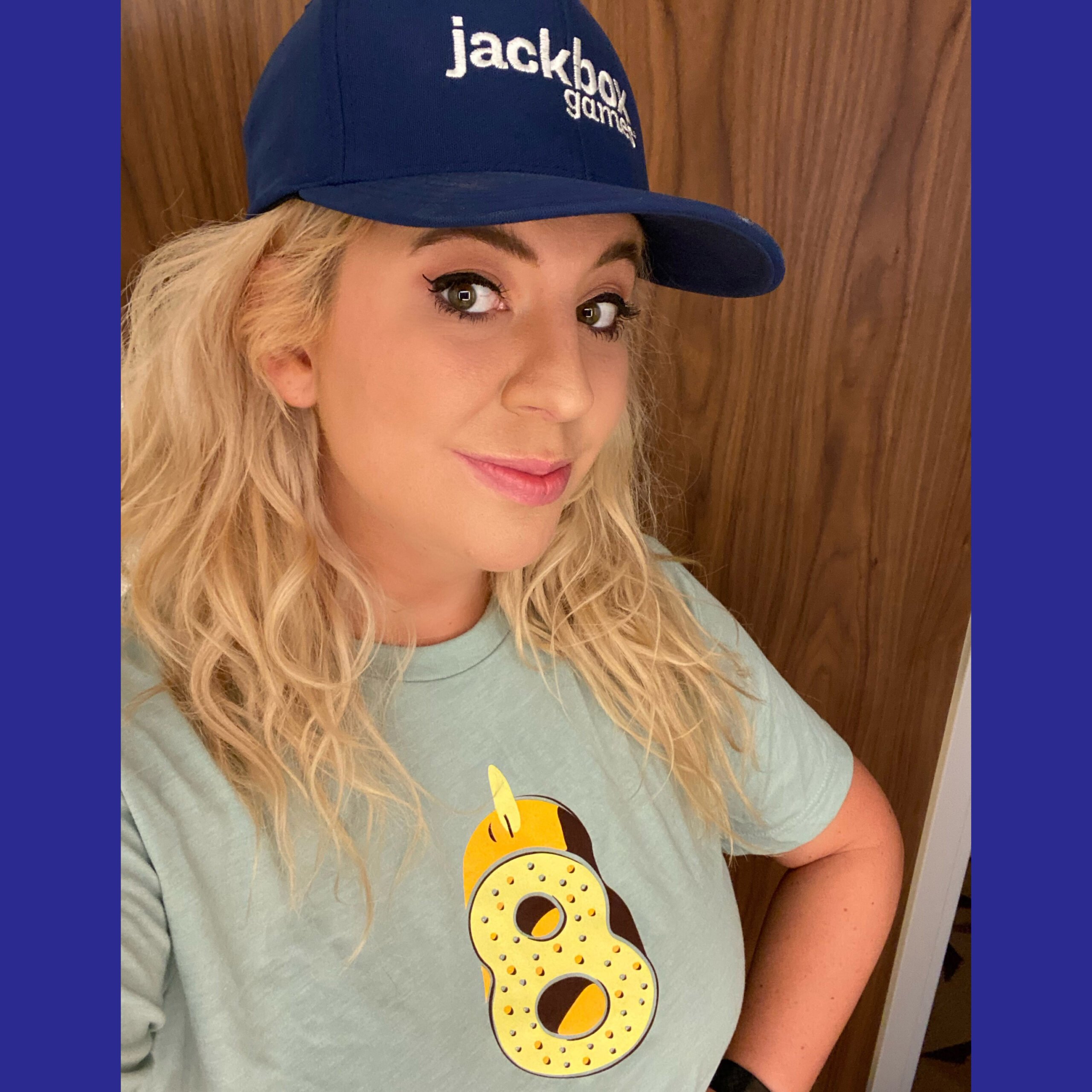 Okay, so I’m writing my own intro. Usually, with people’s staff spotlight blogs, there’s an intro written by someone besides the staff member being spotlighted. And lately, I’m kind of *the person* who writes those. I’m the captain of this ship, and by “this ship” I mean the Jackbox Games blog content. What I say goes. Don’t sass me! Do you want to go to your ship…room?

Anyway, meet me! I’m Michelle Leatherby, and I am the Captain of This Ship the Content Marketing Specialist at Jackbox Games. What does that mean? Well, I manage the socials, I coordinate blog content, I send emails… y’know. Content.

1. What brought you to Jackbox Games? And, how long have you been with Jackbox?

I started working at Jackbox Games in April. I’d been a fan of the games for a few years, and saw a post for this role on LinkedIn. Immediately, it seemed like such a good fit for me. I saved the job, checked back a couple days later, and the post was gone! I emailed, and was told they’d already started moving forward with people for this role, but I could send my resume and cover letter to be considered for something down the road. I worked much harder on that cover letter than any other I’d ever created. And it worked, I guess! They moved me forward in the interview process. I wrote a version of this blog about playing Party Pack 7 at work as part of my “audition” for this role, and then they just gave me the keys to the Twitter and said “go forth, be a Brand.”

2. What is your favorite thing about your specific role at Jackbox?

I love managing our social media accounts! Along with sharing important updates with our fans, I get to create silly memes and work with other Jackbox Games team members on special projects for social media. I also get to see all of the fan feedback about our games. I’m very active in our company’s Slack channel, and a lot of times, it’s me sharing links to fans’ tweets, TikToks, etc.

3. Aside from the work associated with your role, what do you enjoy most about working at Jackbox?

Jackbox has a pretty healthy company culture. The company is filled with really talented people, which you would expect, but it’s also filled with genuinely kind and supportive people. I know I can prioritize my health and mental health when need be, and I can count on teammates to help me with challenging tasks.

Also, the office has free snacks.

4. Do you have a favorite Jackbox memory?

I HAVE THREE AND YOU CAN’T STOP ME.

3) I count The Wheel’s Twitter takeover as one of my favorite days at Jackbox so far. I was in a Slack channel with some of our writers brainstorming Wheel responses to questions in real-time, and the energy was incredible (even though we were all working remotely). At one point, I had to get in a Lyft and go somewhere, so I was coordinating responses from my phone in the back of this car. I audibly laughed on multiple occasions during that otherwise silent car ride because the writers’ jokes were so funny.

5. Do you have a favorite Jackbox game? If so, what is it and why?

Quiplash has a special place in my heart because it’s a game I played with my family on holidays. My dad would absolutely destroy the rest of us with his responses. It’s a super fond memory, and I can only imagine how proud he’d be to know I’m working at Jackbox now.

I’m also a big fan of Joke Boat. I love crafting a dumb joke, and the art style is fantastic. Good job, Owen.

6. What might surprise people about working at Jackbox or working in marketing?

Company playtests were a thrilling surprise for me upon starting. People in any department are invited to playtest games in all stages of development and provide feedback. It’s instant team-building, and when I started I kept thinking to myself “I’m getting paid to PLAY GAMES?!”

I also have a lot of thoughts about running a Brand Account(™) on social media. People often forget that there’s a literal human person behind those accounts and will say wild things to you! C’mon, user56723. It’s me, Michelle!

7.What are some hobbies you enjoy outside of work?

One reason I was drawn to Jackbox Games as a workplace is because I am involved in the comedy scene here in Chicago, and I knew Jackbox employed some comedians. A comedian finding a job with healthcare is rarer than a redhead on Leap Day (they didn’t hire me as a writer 😢). My personal Twitter account is @michelleloserby.

I also enjoy kayaking, long walks with my dog, and generally being a catch. Here’s a TikTok I made for work ha ha ha ha