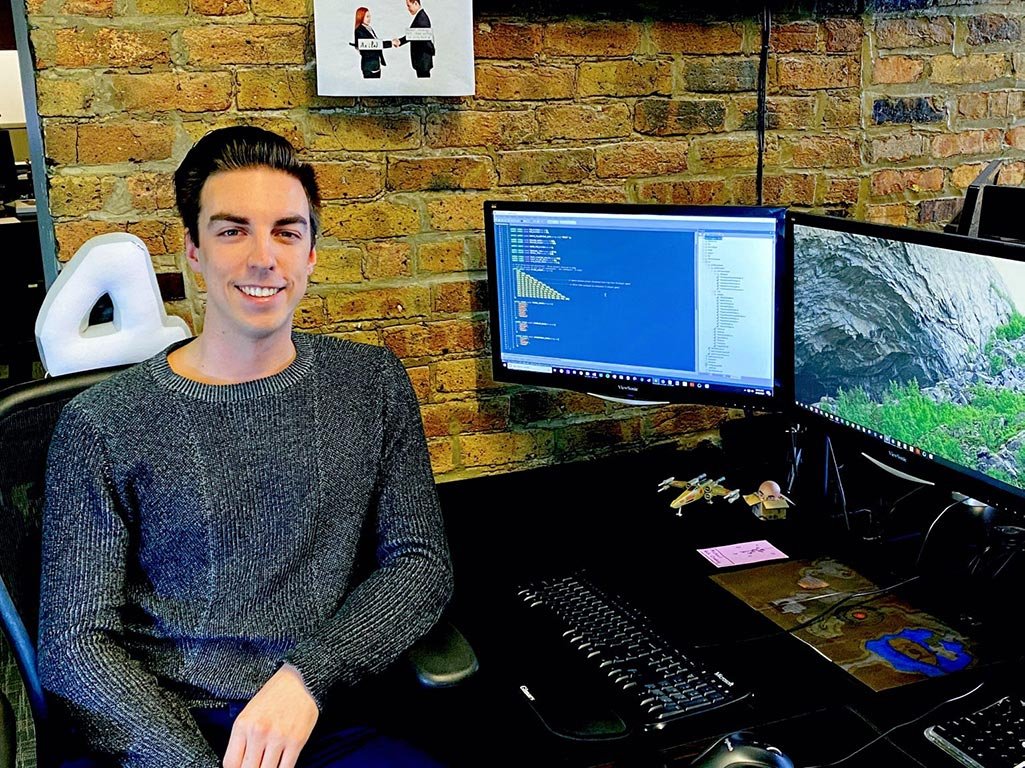 Meet Michael Siciliano! Michael is a game engineer extraordinaire here at Jackbox Games. Initially an engineering intern, we decided to never let him leave. Lucky for us, Michael’s a wizard at playtesting, an excellent stream guest host, and always up for taking on a new and complex project.

Read on to learn more about Michael!

Jackbox Games was a formative part of my college experience. The heat and pressure of people crammed around a $25 projector crushed the carbon of our bodies together into an impermeable, if visually flawed, diamond of friendship.

I jumped at the opportunity to create those experiences for others, and have been at Jackbox Games for over a year now.

What is your favorite thing about being on the engineering team at Jackbox Games?

My favorite thing is the autonomy we have to take our inane ideas and make games out of them. Games that people will, inexplicably, excitedly play.

Despite my best efforts, I have yet to come up with a concept puerile enough to make someone tell me, “Stop, gosh darn it! This is still a place of business and your fart jokes are undermining the very core of the studio! Please, stop.”

What do you enjoy most about working here?

Playtesting other people’s game ideas is technically part of the job description, but it’s so fun that I can’t convince myself that it’s real work.

Having to persuade people that my drawing of a cake is the least likely to contain poop? Right before lunch? Yes, please.

Our games are like Ben & Jerry’s flavors: they’re all good, but sometimes I get an insatiable craving for a specific one.

Right now, I can’t stop thinking about Fibbage: Enough About You (a special version of Fibbage 3 in The Jackbox Party Pack 4). It’s the perfect way to get to talk about yourself to your friends under the guise of a fun and beautifully made game!

It might surprise people to learn that, despite having a corner space with windows, the area the engineers sit in is known as the “Engineering Cave.” This is because every morning people elect, of their own free will, to close nine separate blinds so that we all sit in a suffocating darkness.

When I moved to Chicago I assimilated into the rock climbing community, which is apparently large enough to support eleven different gyms. It’s a welcoming, positive, bordering on cultish activity. Plus, it’s a great way to stay in shape.

I also perform improv around the city, which I got into so that I could win more meetings against my hilarious coworkers here at Jackbox Games.