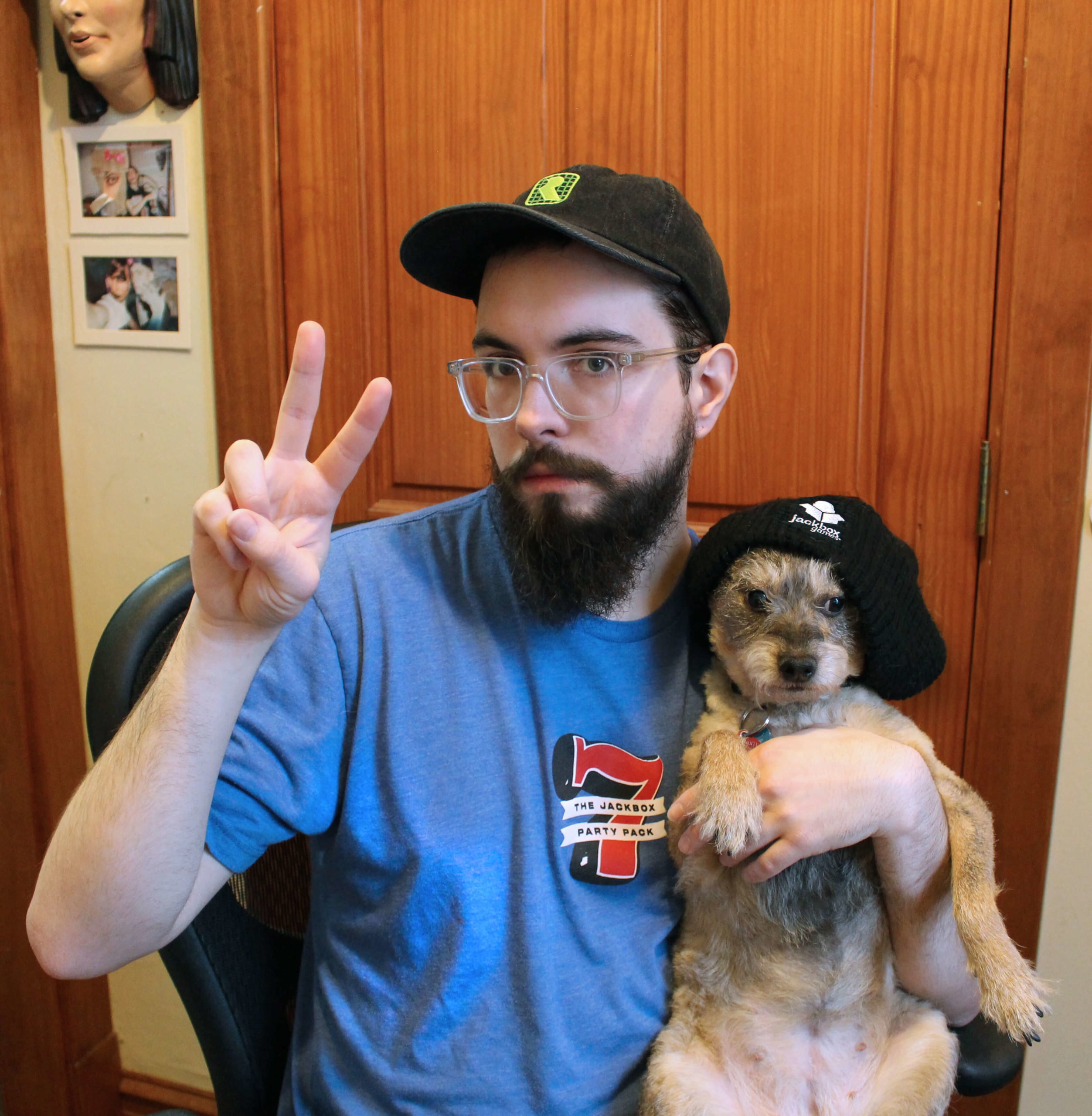 Alex is one of the delightful producers at Jackbox Games! Producers are the champions of making sure everyone on a game team feels supported, keeping teams accountable for goals and deadlines, and breaking down the chaotic work of game development into a realistic timeline.

Read on to learn more about Alex!

I grew up with video games, but always assumed they weren’t a plausible career. I think it was mostly because of those suspicious late-night infomercials about “mak[ing] money while playing games.” Several years passed, yadda yadda yadda, I’m project managing software and realized the dream is actually plausible. As a lover of local multiplayer games and unique art, Jackbox was the first place I looked.

What is your favorite thing about being a producer at Jackbox?

As a producer, I’m a D20 die. In a day, I get to be equal parts pragmatic, emotional, empathetic, and decisive. I end up playing so many roles while prioritizing the health of our staff and our games. I’m empowered to be myself, with the manifold me’s that entails. The whole endeavor feels like a well-written rulebook with a LOT of RNG.

Aside from production, what do you enjoy most about working at Jackbox?

The soul and style of our games is totally conjured in our meetings; it’s all creative seance and sorcery, all very meta. There’s little pretension, and everything is steadily meaningful and collaborative. It’s very special work to be around and that sense of joy is tangible in our conversations.

Role Models has a special place in my heart for its ability to caustically insult (it called me a “bossy liar,” which… fair) but Trivia Murder Party is my favorite. As a lonely nerd, I spent most of my adolescence watching Jeopardy and playing 1-player Mario Party (discomfiting, I know). So, naturally, I love trivia and mini-games. I’m a hair’s breadth away from writing fanfic about the killer host.

Jackbox staffers— they’re just like us! They love potted plants! They ride tandem bicycles! They pick up their dog’s poop!

I’m an avid collector and consumer; I catalogue games, music, movies, TV, books, all day, every day. I like to work through the filmographies of faded actors and AA video games of the 90s and aughts. I enjoy reading nonfiction, interviews, and game postmortems that unravel how media came to get made. I’m a massive fan of America’s Next Top Model. Also, I’m very quirky in that I’m obsessed with my dog: Tookie.

A more unique hobby of mine is recovering and preserving esoteric or lost media. My worst nightmare is a friend nostalgically recalling an obscure reality show from 2007 and having no means to stream it.