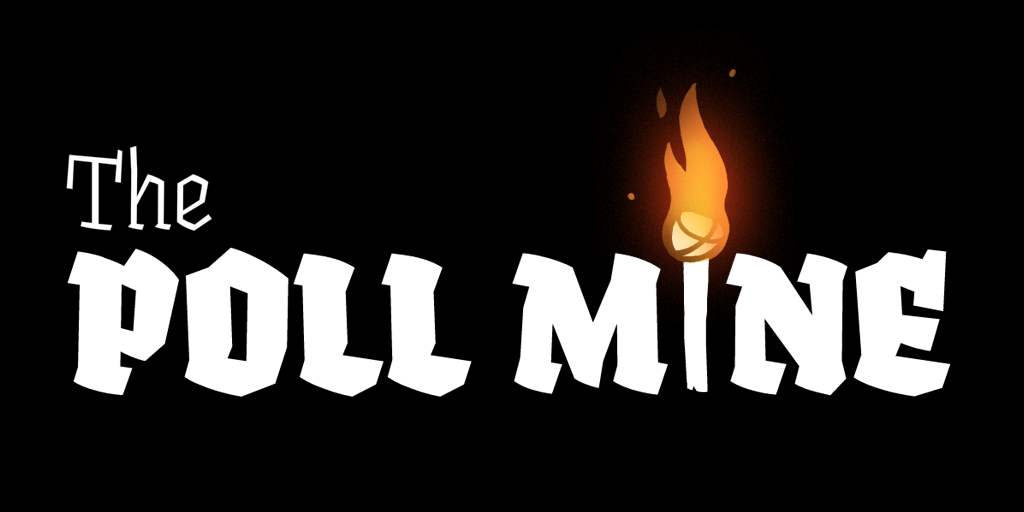 Jackbox Games’ first ever head-to-head team party game, The Poll Mine, is coming October 14, 2021 to The Jackbox Party Pack 8.

Picture this: two teams are stuck at the bottom of a mine. Luckily, the exits are clearly labeled… with opinions. Can you escape? That depends. Do you think the other team would rather ride a mechanical bull or a unicycle?

The Poll Mine will be available this fall in The Jackbox Party Pack 8, but thanks to Nintendo, we’re giving you an early look at the gameplay, artwork and dungeon debates featured in this unique survey experience. Of course, you can learn more about the game right here…

We’re giving you an exclusive look at gameplay from our first-ever team-based party game on Nintendo’s YouTube channel. The Poll Mine starts by splitting the players into two entombed teams. You are then asked to answer a couple of surveys that gather your opinions on everything from favorite pizza toppings to preferred pirate name.

You can confer with your team and deduce, through discussion, how the other players feel about clothing styles, horror movies, coffee mugs, etc. All options sit above ominous doors. When it’s your turn, you must choose a door, hold your breath, and see if the room contains a life preserving torch or a horrendous – but beautifully drawn – monster.

The Poll Mine is hosted by a witch who is amused by your life and death decisions. The game was created by a team of game designers who were entertained by the unique ways each playtesting team responded. “The thing that stood out quickest was that the answers were wildly different between different groups,” noted The Poll Mine’s Director, Warren Arnold.

Arnold sees this new offering as an extension of previous Jackbox Games favorite, Guesspionage, which asks players to divine the thoughts of 100 random strangers. The goal in The Poll Mine, however, is to be more personal and ramp up the tension.

The conception of The Poll Mine started with Arnold asking random survey questions on social media. “As it turns out, people love to take surveys and they especially want to know how others answered,” Arnold remarked. This observation about people wanting to know the “correct” survey answers is what led to the dramatic stakes of escaping from an enchanted mine by finding the “right” door.

Once it was decided that the teams would be “adventure parties” navigating a mystical cave, Lead Artist Bruno Rodríguez went to work.  “I really enjoy the aesthetics of some early dungeon crawlers and fantasy RPG video games. I wanted to evoke some of that look and mix it with a more current, yet wacky, art style.” Rodríguez said.

The monster-filled dungeon atmosphere cranks up the tension and may lead to some intense debates on which opinion is “safe,” but you don’t have to be in the same room as your fellow players. The Poll Mine is the first Jackbox Game to offer a unique streamer mode that allows the audience’s opinions to actually become part of the gameplay

This high-stakes game of survey survival is just one game in The Jackbox Park Pack 8, which also includes:

The Poll Mine is coming to the Nintendo eShop this fall alongside four other games in The Jackbox Party Pack 8.
It will be available for $29.99 and support anywhere from 2-10 players depending on the game and supports thousands of audience members playing along to influence the outcome of the game.

Are you ready to enter The Poll Mine? Good news… The Jackbox Party Pack 8 is now available on major platforms!