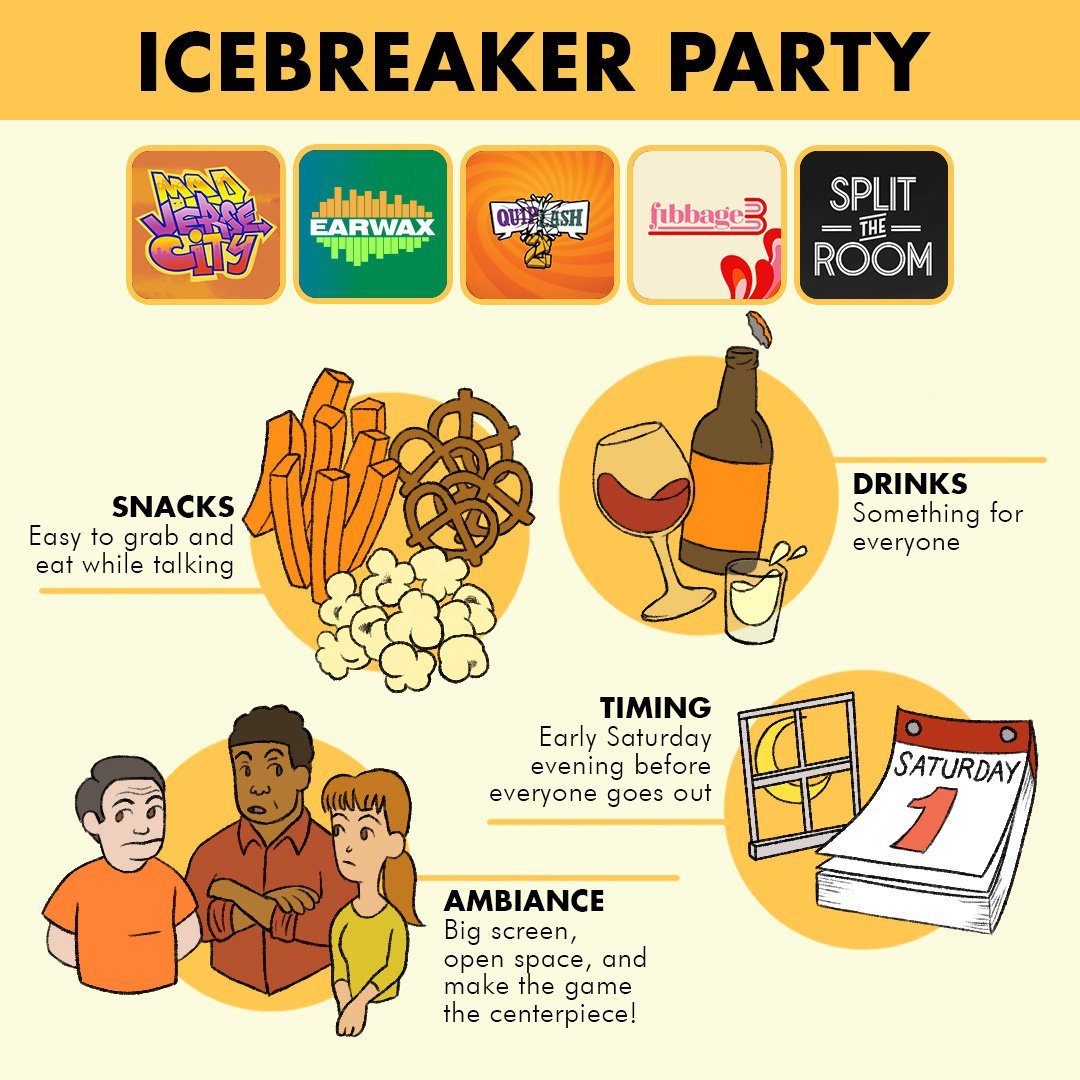 It’s holiday party season, and that means a lot of standing near food and making awkward small talk with friends, relatives, and boring strangers. If only there were some way to get the party going, while still ducking the social pressure of actually getting to know someone. Good news! Games exist!

Jackbox Games makes a wide variety of digital party games. The games are displayed on a TV, while the players use their phones (or any device with an internet browser) to write and draw their answers. No video game experience required. Here are our favorites for breaking the ice at your next guilt-mandated gathering:

In Fibbage, you get a weird fact with a key piece of info blanked out. You fill that blank with a lie that you think might fool the other players. Then you try to pick out the truth and avoid the lies. The bizarre facts in Fibbage will give your group plenty to chat about over drinks. And you don’t have to be good at trivia, just good at lying. You already lied once when you told yourself you wanted to leave your nice cozy home to come to this party and talk to Greg. You’re off to a great start!

Channel your inner MC as a rap-battling robot in Mad Verse City. The game helps you create a four line rap verse, then you get to hear your mechanical avatar rap the bars you’ve written. (They’re a little monotone, but they’re doing the best they can without emotions.) Anything’s funny when a cartoon robot says it, so you don’t have to worry if you’re rhymes aren’t so hot. This one’s bound to create some instant inside jokes, and hopefully convince at least one friend to quit their job and start touring freestyle tournaments as “MC Cool Greg.”

Drawful is the drawing game for people who can’t draw. You’re given a prompt that’s purposely obtuse, like “smelly CEO,” or “annoying voice,” and asked to draw it… on your phone… using your finger. The other players see your predictably bad drawing and try to guess what it is, while also trying to trick the room with their fake titles. The fun is in the absurd monstrosities that your group creates. But the game also keeps score, so the one weirdly competitive guy at the party (A.K.A. GREG) will have something to shoot for.

No rules. No correct answers. Quiplash is the classic “say anything” party game. Players type in their best response to a weird prompt (like “The worst thing to hear during a massage”) and then get pitted against each other in a head-to-head battle, while the others vote for their favorite. The great thing about Quiplash is that it can be as “safe for work” (or extremely not) as the room wants it to be. And the game does a good job of helping even the most stuffy players come up with something funny enough to beat whatever Greg wrote. Is anyone else sick of Greg?

Split the Room uses a little more brain power, but generates the most conversation. Players get a weird hypothetical situation that’s missing one key detail. For example: “You suddenly have the power to destroy every copy of _____. Do you do it?” Your job is to fill in the blank with something as divisive as possible. Something that will “split the room” so that half the players would say yes, and half would say no. It’s perfect for starting heated debates over which limb is the least important or why smelling “Greg’s sweaty cabbage feet” is a worse fate than death. Oh, and it’s hosted by an omniscient cat.

There are plenty more Jackbox games to discover, but these should give you a good place to start. Most Jackbox Games titles come bundled in one of the company’s Jackbox Party Pack collections. Check out jackboxgames.com/games for more information on how to purchase and play. Your fellow party companions will thank you! Except Greg, but screw that guy.